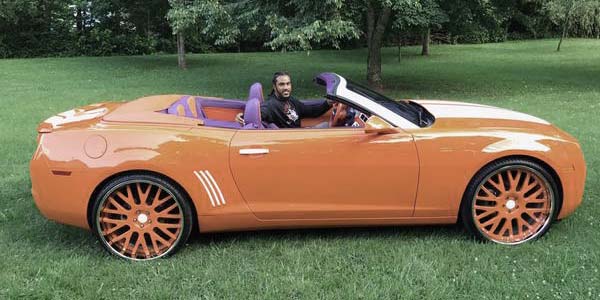 This year’s winner is Eddie Black, owner of Black’s Body Shop, located in Adairville, Georgia. Black customized a 2012 Camaro for Vic Beasley, an NFL All Star outside linebacker who plays for the Atlanta Falcons. 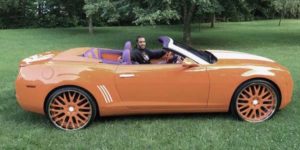 Malcolm Johnson, CEO of ColorBond Automotive Paint, has announced the fourth annual recipient of the Cleo Interior Restoration Trophy. This year’s winner is Eddie Black, owner of Black’s Body Shop, located in Adairville, Georgia. Black customized a 2012 Camaro for Vic Beasley, an NFL All Star outside linebacker who plays for the Atlanta Falcons.

Black painted the interior Lamborghini Orange and Purple with ColorBond LVP and no interior replacements part were used. All components are original. The exterior is painted with Tri Color Diamont Systems, donated by Southeastern P&B. The vivid colors honor Beasley’s alma mater, Clemson University. The 350 man-hours that were spent on this project reflect the artistry and dedication of Black and his staff.

The Cleo Award was established in 2012 to honor SEMA Hall of Famer and longtime SEMA member Leo Kagan. Kagan was responsible for moving the SEMA Show in 1977 from Anaheim to Las Vegas. Kagan, who is 101 years young, has participated in 51 SEMA Shows and will present the trophy in the ColorBond Booth, at SEMA this fall in booth No. 23889 in the main hall.

The Cleo Crystal Trophy and a $500 check is awarded to the individual who best utilizes ColorBond paint to restore the interior of an automobile. Past vehicles include a 1967 Cadillac Deville that was owned by associate of the Las Vegas “Rat Pack,” and a 1953 Rolls Royce. Last year’s winner, Carlos Medaro tuned his 2013 wide body Honda and also will be present to award this year’s trophy.

This year’s award will take place at SEMA at 1 p.m. on Wednesday, Nov. 1 in the ColorBond Booth, No. 23889 Main Hall. A birthday celebration for Kagan will immediately follow the presentation. All are invited.

Advertisement
In this article:awards, ColorBond Automotive
Print
Up Next: