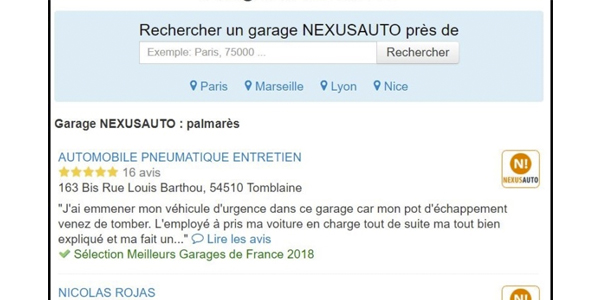 To win a place on the list, each garage had to achieve at least 10 published and verified reviews from customers, score an average rating of more than 4 out of 5 and have fewer than 5 percent negative comments. 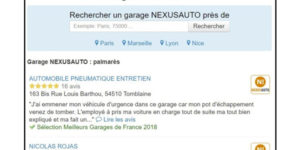 Independent garages in the NEXUSAUTO network are among the most recommended in France, according to leading customer review website AlloGarage.

Fourteen NEXUSAUTO workshops are featured in the newly published 2018 “Best Garages in France” listing, as voted for by the country’s motorists.

To win a place on the list, each garage had to achieve at least 10 published and verified reviews from customers, score an average rating of more than 4 out of 5 and have fewer than 5 percent negative comments.

AlloGarage.fr has been publishing customer reviews since 2007 and lists more than 25,000 garages from all over France.

The NEXUSAUTO workshop concept was developed and is managed by NEXUS Automotive International (N!).

Claudie Cahart, member of NEXUS and NEXUSAUTO coordinator, said, “This is a fantastic achievement by each of the garages listed. They have been chosen to be the best of the best by the people who really matter – their customers.

“It is also a proud moment for the network as a whole, for more than 10 percent of those judged to be the 2018 Best Garages in France are NEXUSAUTO workshops. As a relative newcomer we have done well to disrupt the market in such a positive way,” added Cahart.

Cahart explained that partnering with AlloGarage was at the heart of NEXUS’s digital strategy for the NEXUSAUTO network.

Garages had for many years delighted customers with their skills and additional services such as courtesy cars, financing and valeting. But they had failed to communicate it.

Giving motorists the chance to comment on their experience not only highlighted best practices but also encouraged workshops to do even better, she said.

By joining the network independent garages are able to be listed by AlloGarage, providing the opportunity to raise their Google ranking, as well as gain access to many other NEXUSAUTO services.

The NEXUSAUTO workshops featured in the 2018 Best Garages in France listing are:

NEXUSAUTO Workshops Named Among 'The Best In France'