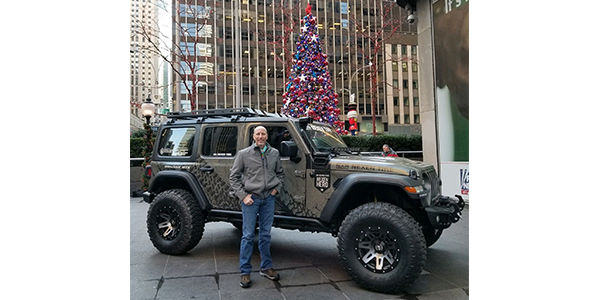 Cates is the third veteran selected to receive a custom vehicle built by Nexen Tire as part of its commitment to honor the nation’s heroes.

Cates military career spans 26 years and started in the Army Reserves at age 18, then he took to the seas by enlisting in the Coast Guard. Cates was a shipboard and land-based electronics technician and served just over four years. Not quite done with serving his country, he decided to enlist in the Army where he served another incredible 22 years.

From the moment he joined the military, he wanted to set the example for exceptional leadership, as his father (Jay Cates, U.S. Coast Guard, retired) did before him. Cates was deployed during the Iraq War and received several medals throughout his career for exemplary military service. Most notably, Cates was awarded the Bronze Star Medal, Army Commendation Medals and Army Achievement Medals and the Humanitarian Service Medal.

Although Cates retired from the Army in August of 2015, he has continued his mission helping others. Cates is now the CEO of the Fort Hood Area Habitat for Humanity that serves three counties in the greater Killeen/Temple, Texas, area. Since taking on that role, Cates has helped the organization triple the amount of homes it completes each year, in addition to nine other unique projects centering around repairs and community revitalization. These changes have positively impacted more than 30 families, but Cates isn’t one to rest on his laurels. Through his vision for the organization, Cates has led the group to a new milestone by completing 26 homes in the veteran community. These homes were built for homeless and disabled veterans, and in addition to more than 48 other projects last year, Cates’ leadership helped the organization impact 150 families.

“It’s an honor to be selected as the recipient of the Nexen Hero Jeep Wrangler. I’ve dedicated much of my life to military service, and what Nexen Tire is doing with this vehicle and its campaign is incredibly humbling. It’s an honor for any veteran,” said retired Sgt. 1st Class Ken Cates. “I believe in creating an environment to help those who want to lead and to this day, I still get phone calls from young soldiers seeking advice and I’m happy to help them in any way possible. I couldn’t be more thankful to Nexen Tire and what they are doing for veterans.”

“Some stories have a silver lining and Ken’s is no exception. We wanted to open the Nexen Hero III campaign to all veterans this year and of the thousands of entries, Ken’s story of perseverance, his 26-year career and his ongoing commitment to his community really stood out to us the most,” said John Hagan, executive VP of sales for Nexen Tire America Inc. “Ken continues to help active service members be the best soldiers they can and as the CEO of a local Habitat for Humanity, helps veterans and deserving families find a home. For those reasons and more, we’re honored to name Ken the vehicle recipient of the Nexen Hero III Jeep.”

Donations made to the Purple Heart Foundation during the campaign will be used to help empower veterans on many levels, such as educational scholarships, medical claims and more.

“Our continued partnership with Nexen Tire helps our organization continue raising awareness not only for Purple Heart Medal recipients, but veterans like Ken Cates,” said Stephen Ruckman, chief executive officer for The Purple Heart Foundation. “Ken Cates and veterans like him deserve to be recognized for their commitment to their communities after serving their country, and programs like the Nexen Hero III campaign set the standard for representing veterans in the best way possible.”