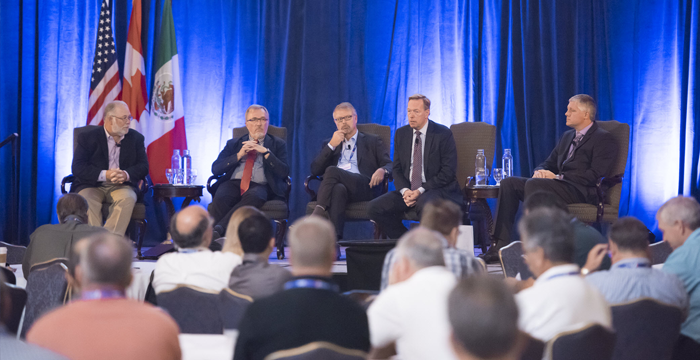 The event took place Sept. 29 through Oct. 1 and was attended by more than 500 members, vendors and guests. 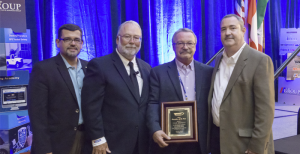 Bill Maggs presented the 2015 Pronto Executive of the Year award to Yvan Domingue of Monaco Group Automotive from Montreal, Canada.

National Pronto Association recently held its annual Fall Shareholders Conference in Chicago. The event took place Sept. 29 through Oct. 1 and was attended by more than 500 members, vendors and guests.

The conference began Tuesday evening with Pronto President and CEO Bill Maggs giving an update on Pronto’s progress throughout the year with Federated Auto Parts in the Automotive Parts and Services Group, also known as “The Group.” Maggs announced that The Group had appointed Larry Pavey as CEO, and Roy Kent, Mike Mohler and Murray Sullivan as executive vice presidents.

The night concluded with Pronto awarding its annual supplier awards. The winners included:

Maggs then presented the 2015 Pronto Executive of the Year award to Yvan Domingue of Monaco Group Automotive from Montreal, Canada. Maggs said Domingue was chosen “for his tireless efforts in helping to promote and improve the Pronto organization.”

The meeting continued with a members-only session Wednesday morning followed by the Pronto members attending a vendor booth show featuring more than 120 exhibitors. The exhibition allowed Pronto members to view both current and new offerings from the entirety of the Pronto vendor community.

Thursday’s activities were highlighted by a morning Executive Industry panel discussion with Omer Wesemael and Thomas Vollmar from AD International in Europe, Bill Long from AASA and Dan Risley with ASA. This discussion featured individual presentations on the European markets and perspectives from the supplier and service center segments of the industry. The presentation concluded with a Q&A session. Larry Pavey, new CEO of The Group, then presented an industry overview filled with insightful information about the “state” of the auto care industry. The afternoon finished with private member-only sessions covering various topics including product, sales and marketing and technology. To close the meeting, Pronto held a private farewell party at the famous Buddy Guy’s Legends blues bar.

Maggs commented, “I really believe this is the best meeting we have had in many, many years. There is a genuine high level of enthusiasm among our membership for everything we are doing. I am as excited about Pronto and The Group as I possibly could be.”