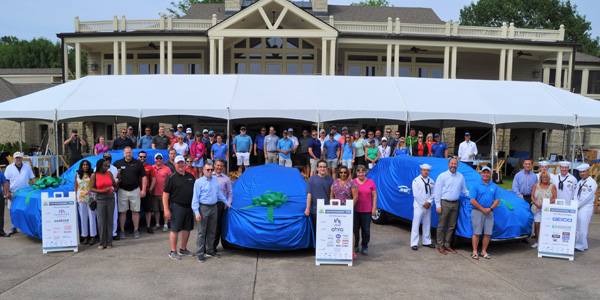 On June 3, three deserving St. Louis veterans experienced a life-changing event: the presentation of vehicles to provide them independence and the ability to work and take care of their families.

“All three of these St. Louis community members served their country and were honorably discharged,” said Bill Garoutte, president and CEO of NABC. “Through the NABC Recycled Rides program and our partners, we are able to thank them for their service and help them live more productive, robust lives with reliable transportation. It’s an honor to work with our great member companies to give back to those who have given so much.”

Karen Cooksey – Cooksey served in the military from 1983 to 1989, where she worked as a Morse code operator. She then trained as an air-traffic controller and was assigned to fly with the National Emergency Command Air Post, known as NECAP or better known as Air Force 2. She also flew with the AWAC’s surveillance mission and sat directly behind the engineer in the cockpit during the flight. She then transferred to the Philippines, tracking the NPA or New People’s Army – what came to be known as the Taliban. Through her service and the following years, she has endured debilitating spinal pain, several failed surgeries and ongoing cardiac and diabetes issues. These conditions made it impossible for her to work, and she became homeless, living in her Jeep. Working with the Veterans’ Administration and H.E.R.O.E.S., she is working to overcome these challenges. As her Jeep is in poor condition and she isn’t able to afford a car payment with her medical bills, a refurbished vehicle will allow her to get to her medical appointments and hopefully recover so she can return to work.

“It’s just unbelievably exciting, “ said Cooksey. “The car is sharp – it’s a beautiful car, it’s gorgeous. I’m in shock I think, I’m having a hard time wrapping my arms around all that has happened today. It’s more than I ever thought I would see in a lifetime.”

Adelita Ousley – Ousley is a proud Navy veteran, having served on active duty for eight years from 1988 to 1996. While in the Navy, she was a boatswain’s mate, serving on submarine tenders. Submarine tenders are auxiliary supply ships serving the submarine fleet. She left the Navy with an honorable discharge. In 2002, she joined the Missouri National Guard. While still currently serving in the Guard (St. Clair, Missouri), she has been a mechanic, a military policeman and currently a sergeant working in Food Service. In Food Service, she provides supervision and guidance for other food service personnel in the preparation and serving of quality meals both in the field environment and in the garrison. She likes serving her country, and as a civilian, she works with people with physical and mental disabilities. After a serious illness, a major vehicle breakdown and a pending divorce caused her to lose her job and triggered depression and PTSD, she reached out to H.E.R.O.E.S. to help get her life back on track. The gift of reliable transportation will help her get back to work and continue her education.

“The car is beautiful, and the very first thing I noticed was the National Guard emblem,” said Ousley. “I appreciate everything the NABC and these people have bestowed on me – the car, the TV, the laptop, the kitchen (appliances), everything. I very much appreciate it.”

Melvin Wright – Wright spent a total of 23 years of combined active and reserve duty in the U.S. Army. He served in the U.S. Army from 1971 to 1973, enlisting during Vietnam and serving his active-duty time in Germany. He was a truck driver while stationed in Europe. When he returned, he joined the Army Reserves and was based at Scott Air Force Base, where he worked in logistics supplying maintenance parts to helicopter flight teams. He retired from the Army Reserves in 1996 at the rank of staff sergeant. He is retired and disabled, with the injuries coming from service-connected issues. He lives in Vinta Park with his wife, four daughters and six grandbabies. However, he and his wife have no transportation to their medical appointments, for grocery shopping or other daily needs. He doesn’t want to be a burden on his family members, so a reliable vehicle would allow him to take care of his wife and himself.

Advertisement
In this article:carstar, GEICO, NABC Recycled Rides
Print
Up Next: