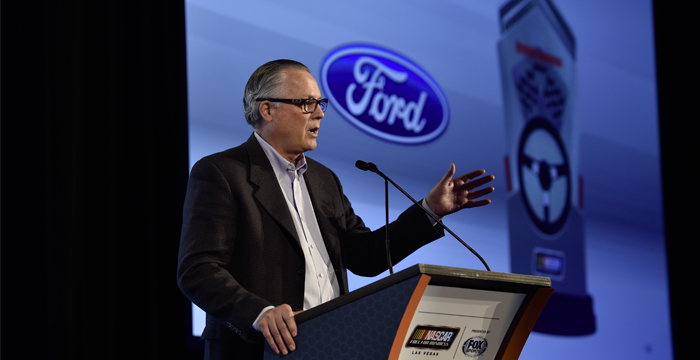 Ford is the first three-time recipient of the annual award, which is bestowed upon the Official NASCAR Partner that demonstrates leadership and results through its participation in the NASCAR Fuel for Business Council. 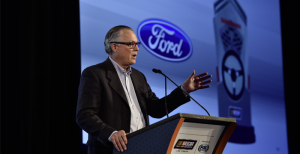 Days after Ford Motor Co. celebrated its first NASCAR Sprint Cup Series victory of the season, the manufacturer took home its third NASCAR “Driving Business Award.” Ford is the first three-time recipient of the annual award, which is bestowed upon the Official NASCAR Partner that demonstrates leadership and results through its participation in the NASCAR Fuel for Business (NFFB) Council.

The NFFB Council hosted its first meeting of the year in Las Vegas, bringing together an exclusive group of nearly 60 Official NASCAR Partners. Ford has been competing in NASCAR since 1949 and has been a proud member of the NFFB Council since 2007. Council members bring key personnel from across their organizations to construct customized deals that help address specific business needs.

As a result of Ford’s participation in the council in 2015, Ford aligned business goals with a number of Official NASCAR Partners, resulting in highly visible partnerships and a number of programs that were successful in “Driving Business.”

“As a proud member of the council, winning the ‘Driving Business Award’ for the third time is proof, yet again, of how effective the NASCAR Fuel for Business Council platform is at generating a positive return on investment for partners,” said Tim Duerr, Ford Performance motorsports marketing manager. “At Ford, we’re constantly identifying new and innovative ways to add value to our partnerships, and this tool maximizes our B2B strategy in motorsports.”

As one of the most active participants of the NFFB Council in 2015, Ford identified procurement opportunities, optimized chances for NASCAR partners to purchase Ford vehicles for their fleets, offered participation in Ford’s “Partner Recognition Program” and created successful co-marketing programs. Highlights from Ford’s success in 2015 leveraging the NFFB Council include:

“Ford continues to be a preeminent member of the NASCAR Fuel for Business Council, setting the standard as an active and dedicated partner during our quarterly meetings,” said Steve Phelps, NASCAR executive vice president and chief marketing officer. “Committed to winning both on and off the track, Ford’s ability to execute business-to-business deals delivered results worthy of being a three-time recipient of the award.”

Since the NFFB’s 2004 inception, the council has facilitated hundreds of millions of dollars in annual revenue and savings to its participating members.

Tenneco Named A 2015 Supplier Of The Year By GM