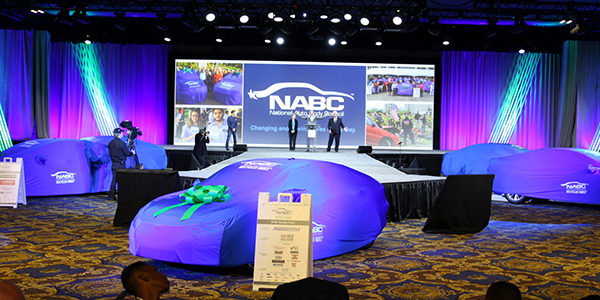 The NABC Recycled Rides recipients gathered with their children, spouses and friends to unveil their newly refreshed vehicles in spectacular fashion. Karl Champley, automotive and home improvement expert and TV host served as emcee for the presentation.

The confetti streamed and so did the tears as six deserving Las Vegas residents received gifts of refurbished vehicles to help them take care of their families, get to work, manage medical appointments and gain their much-desired independence.

The NABC Recycled Rides recipients gathered with their children, spouses and friends to unveil their newly refreshed vehicles in spectacular fashion. Karl Champley, automotive and home improvement expert and TV host served as emcee for the presentation.

“Annually, this is our biggest event that we put on for all of those in the industry who support the work of the National Auto Body Council,” said Darren Huggins, chairman of the board for the NABC.  “Changing lives for these six families is what we are all about, and it takes a collective effort of industry leaders to make it possible.”

• Chris Feliz and Amanda Holland, parents of four, who relocated to Las Vegas from a small town in Arizona with their four children, didn’t imagine they would end up homeless. But they found the Family Promise Homeless Shelter, and that helped them on the path back to independence. Chris was introduced to Job Connect, and he found a job with an apartment complex, which provided them housing.  Amanda just started a position with Blue Cross Blue Shield. Now their challenge is getting their children to charter school and activities, which today involves some three hours on buses and ride shares. They were nominated by Family Promise, and today, Feliz and Holland unveiled a 2018 Chevy Malibu that was donated by Hertz and repaired by Service King- Red Rock. This gift of transportation will provide them the final piece they need to return to full independence.

• Cathy Fromoltz and her husband John received a 2017 Toyota Corolla that was donated by GEICO and refurbished by Gerber Collision – Henderson.  Cathy Fromoltz was selected by Lake Mead Ministries to help her get back on her feet after losing her position at the Rainbow Casino. She then found out she had cancer and had no insurance, which meant she and her husband had to sell their car to take care of medical bills. Cathy and her husband, who is disabled, move to Las Vegas to care for John’s parents.  They also have an adult son who is mentally challenged and lives with them.  This gift of transportation will help them care for their family and get to their medical appointments.

• Jeremy Davis and Naomi Jenkins, who have worked hard to earn their independence. As parents of two, they trade work and child-care responsibilities between the day shift and the evening shift. They spent just a few months in the Family Promise shelter program before moving on to their own home. They received a 2018 Ford Fusion that was donated by Enterprise and refurbished by CARSTAR Collision Masters in Las Vegas.  Between daycare, school and jobs, this gift of a vehicle will make an incredible difference in their lives.

• Felicia Houston is a hardworking single mother of an 11-year-old son who said reliable transportation is the only gift she wants for Christmas. Santa delivered a 2017 Nissan Altima that donated by State Farm and was refurbished by Gerber Collision. She is enrolled in the Family Promise of Las Vegas Housing and Stabilization Program and has been employed at Mandalay Bay Hotel for the past six years. She has been struggling to get to work and travel throughout the community on public transportation. Even though she has a reliable job she has not been able to save money to buy a car. With the gift of the vehicle, Christmas came early for Houston.

• Janata Gibson, and her four teen and pre-teen sons, has worked hard to keep her family together and continue their independence. She moved to Las Vegas a year ago and landed a job within weeks but the family did not have housing. They found it would be difficult to keep the family together because some of the shelters place older teens in a separate dorm of the building. She called Family Promise and there was an opening. Gibson enrolled as a family and there was no separation of the teens. Family Promise guided the family with the necessary resources to obtain a beautiful apartment for her family. Receiving a car means not leaving two hours early to get to work, paying for a taxi to handle errands and make it easier to get the family to school and activities. With the gift of a 2018 Honda Civic from Progressive that was refurbished by Caliber Collision, she is on her way to freedom.

• One additional gifting as part of this year’s program was presented earlier this fall because the family had an immediate need for transportation. Ma’Lia Ashe-Wiggings received a 2014 Toyota Corolla that was donated by Allstate and repaired by Service King – Grass Valley.  Ashe-Wiggins has three little boys. She moved to Las Vegas from California due to domestic violence. When she arrived, she was working two jobs and caring for her children, two of whom have disabilities. She was let go from one job due to her child care duties and medical needs. That led her to get behind on her rent, and she became homeless. Family Promise provided her and her family shelter, food and supplies, which allowed her to work everyday and keep her children in school and daycare. Now, she is getting back on her feet, but still juggling the challenges of managing an active family, constant medical visits and the commute to work. The gift of transportation has made it already possible to more effectively take care of her family and continue her path to independence.

As part of the event, the Hall of Eagles honored Mike Anderson as its 2019 inductee. Also, Margaret Keith was recognized for her work on the NABC F.R.E.E. programs over the years.

NABC Recycled Rides is a unique program in which businesses representing all facets of the collision repair industry team up to repair and donate vehicles to individuals and families in need of reliable transportation. Since the inception of the NABC Recycled Rides program in 2007, members of the National Auto Body Council have donated more than 2,200 vehicles valued at more than $36 million.

Additional partners in the NABC Recycled Rides presentation included 1-800 Charity Cars and LKQ, among others.

Advertisement
In this article:National Auto Body Council
Print
Up Next:

WIX Filters Announces The 2019 Counter Professional Of The Year

AutoVitals Announces The Digital Shop Conference 2020
Connect with us