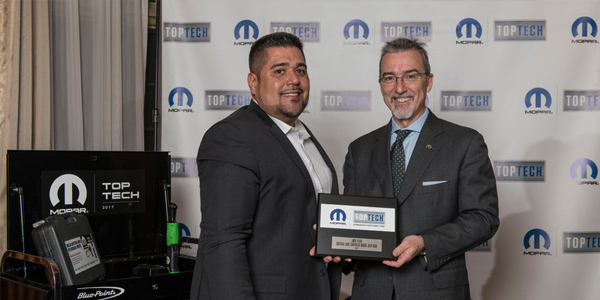 The Mopar “Top Tech” awards are just one initiative used by FCA US to retain and grow its pool of technicians. 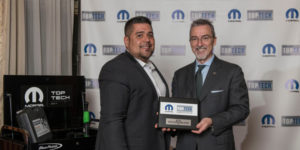 “Technicians play a central role in the success of our business,” said Pietro Gorlier, head of Parts and Service (Mopar), FCA. “As technology in our vehicles continues to evolve, it is essential to properly train and recognize our technicians so they can provide a quick and efficient service and enhance customer satisfaction. The Mopar ‘Top Tech’ program not only shines a light on the best and brightest in our service lane, but also holds them up as a positive example for all of our technicians.”

A group of 27 of the 100 “Top Tech” winners visited the Metro Detroit area in January to participate in a tour of FCA US LLC headquarters in Auburn Hills, Michigan, and an awards ceremony at historic Meadow Brook Hall in Rochester. The trip also included a stop at the Jefferson North Assembly Plant and the North American International Auto Show in Detroit.

“The last thing I ever expected was to reach ‘Top Tech,'” said Jose Felix, a technician at Crystal Lake Chrysler Jeep Dodge Ram in Crystal Lake, Illinois, of his award. “I was just so honored when they told me. I believe in hard work. But it’s not just me, it’s my whole team, from the service advisers to the porters. All of us affect the customer.

“I love working on cars and want to get them fixed. The hardest part about this job is facing an issue that’s tough to figure out. For me it’s very difficult to leave work at work; the challenge will be with me until I get it figured out. The level of technology being used by Mopar today is a big help,” he said.

The 100 Mopar “Top Tech” award winners hail from all regions across the U.S. Winners will receive a Snap-On BluePoint technician tool cart, a Snap-On cordless ratchet and video inspection scope.

The Mopar “Top Tech” awards are just one initiative used by FCA US to retain and grow its pool of technicians. Over the past three years, more than 3,500 techs have been added to its dealership network.

In addition, current FCA US LLC technicians engaged in more than a million hours of classroom or web-based training last year to ensure they possess the most up-to-date knowledge and techniques for working on today’s technologically advanced vehicles.

Advertisement
In this article:fca, mopar, Tech Awards
Print
Up Next: