Groupe Michelin was named to Thomson Reuters’ 2012 Top Global Innovators list, which recognizes the top 100 companies and institutions in the world that are “at the heart of innovation.”

Groupe Michelin was named to the 2012 Top Global Innovators list by Thomson Reuters. 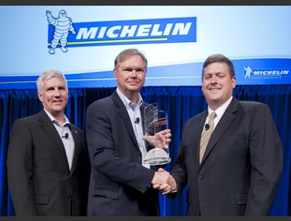 This list, which comes out annually from Thomson Reuters, recognizes the top 100 companies and institutions in the world that are "at the heart of innovation."

"Ever since Michelin was first established, the dynamics of innovation and the search for new technologies for the customer’s benefit have been at the core of Michelin’s strategy," said Terry Gettys, Michelin director of research and development. "This commitment to innovation has continued to differentiate Michelin from the competition, leading to such technological leaps forward as the invention of the radial tire and the first fuel-efficient Energy tires, to name a few.”

Michelin said the Thomson Reuters award is significant “as it focuses attention exclusively on companies that generate a ‘sizable amount of innovation.’ For example, only businesses that have accumulated 100 or more patents in the past three years are qualified for consideration.”