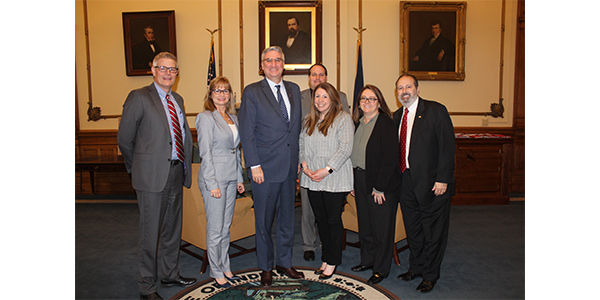 The Motor & Equipment Manufacturers Association, which represents the largest sector of manufacturing jobs in the United States, gives the award to recognize state leaders who have worked diligently on behalf of motor vehicle parts manufacturers.

“Governor Holcomb has proven time and again to be a friend to the important motor vehicle parts supplier industry,” said MEMA Executive Vice President of Government Affairs Bill Long. “Governor Holcomb has been a champion for our industry, which depends on the ability to compete in a global marketplace. MEMA is pleased to recognize his efforts with this award, which carries great significance within our industry.”

“I’m honored to be recognized by the Motor & Equipment Manufacturers Association and this industry that is so critical to the American economy,” said Gov. Holcomb. “I look forward to continuing to push for policies which create jobs in Indiana and across the country in this very important and growing manufacturing sector.”

Indiana is the third-largest state for employment in the motor vehicle parts supplier industry, with more than 88,000 residents employed by motor vehicle parts suppliers. Overall, the industry contributes nearly 3 percent of the U.S. gross domestic product. Employment by suppliers in the U.S. is up 19 percent since 2012, generating a total direct and indirect employment impact of 4.26 million jobs.

Governor Holcomb, a Republican and veteran of the United States Navy, was elected in November 2016. He led the way for the largest long-term infrastructure investment in Indiana’s history with the 20-year “Next Level Roads” program, which will invest $4.7 billion for roads and bridges in the first five years. He also has championed the “Next Level Jobs” program to help get more Hoosiers into high-demand, high-wage jobs. He has a mission to make Indiana competitive in the global economy by “bringing the world to Indiana and taking Indiana to the world.” So far, the governor has met with officials and industry leaders in the United Kingdom, Japan, Italy, France and more to showcase Indiana’s assets and build global economic ties.

The MEMA State Leadership Award is given for outstanding assistance to the motor vehicle supplier industry by an elected official, who is nominated by a MEMA division member and approved by the MEMA Board of Directors. Past MEMA State Leadership Awards have been presented to Gov. Jay Nixon (D-Mo.), Gov. Steve Beshear (D-Ky.), Gov. Rick Snyder (R-Mich.) and Gov. Nikki Haley (R-S.C.).

Advertisement
In this article:MEMA
Print
Up Next:

Association: AAPEX Ranked As One of Top U.S. Trade Shows

Association: ‘Expresso’ Your Company’s Support for the Aftermarket

SEMA Show to Conclude with Expanded After-Party
Connect with us