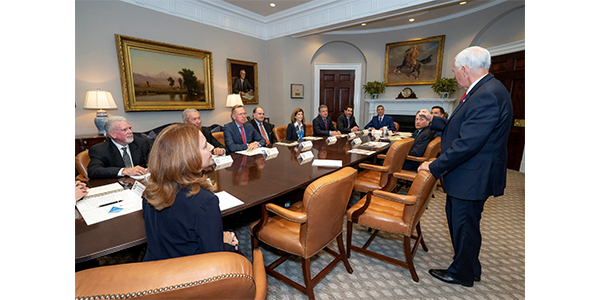 The meeting was part of MEMA’s ongoing effort to work with the Trump administration on policies that impact motor vehicle suppliers across the country.

MEMA and leadership from several member companies met with Vice President Mike Pence in the White House on Oct. 28 to discuss support for the ratification of the United States-Mexico-Canada Agreement (USMCA) and the negative impact Section 232 tariffs on autos and motor vehicle parts will have on our industry, if imposed.

The meeting was part of MEMA’s ongoing effort to work with the Trump administration on policies that impact motor vehicle suppliers across the country. While an important aspect of the meeting was to emphasize the critical role suppliers play in the U.S. economy, the main purpose was to educate Vice President Pence of the threat to U.S. jobs, investment, and business growth stemming from the uncertainty of USMCA and the threat of tariffs on autos and parts. This was the second time that MEMA leadership and members had met with Vice President Pence on these issues and the delegations thanked the Vice President for his leadership and nationwide support to help pass USMCA.

“A stable, reliable trade environment is essential for the continued growth of the motor vehicle supplier industry,” said MEMA President and CEO Bill Long, who led the delegation Monday. “The Vice President and the administration recognizes the powerful contribution vehicle parts suppliers represent to the U.S. economy, be it in jobs or new technology. In the room with the Vice President, we had a small group of CEOs and executives representing companies with employees in 33 states, and nearly 60,000 jobs. As the largest sector of manufacturing jobs in the U.S., the voice of the motor vehicle supplier industry is an important factor as the administration makes trade decisions.”

If the new USMCA is ratified, trade between the U.S., Mexico and Canada will be modernized to remain competitive with other manufacturing centers across the world, foster economic growth and confidence, and maintain stability in the supply chain. MEMA is working to urge Congress to pass the USMCA without further delay. MEMA launched a legislative fly-in event on Sept. 11, where nearly 30 member companies came to Washington, D.C. to meet with legislators and garner support for the trade agreement. MEMA also continues to hold a series of roundtable events, inviting congressmen to connect with motor vehicle parts manufacturers in their state to learn more about key issues affecting the industry, including USMCA. Earlier this month, MEMA joined over 400 other organizations and businesses in signing a letter to Congress requesting that the USMCA is passed during the autumn season. In addition, MEMA is urging members to visit its Action Center to send messages to Capitol Hill and encourage the passage of the proposed trade agreement.

Advertisement
In this article:MEMA
Print
Up Next: