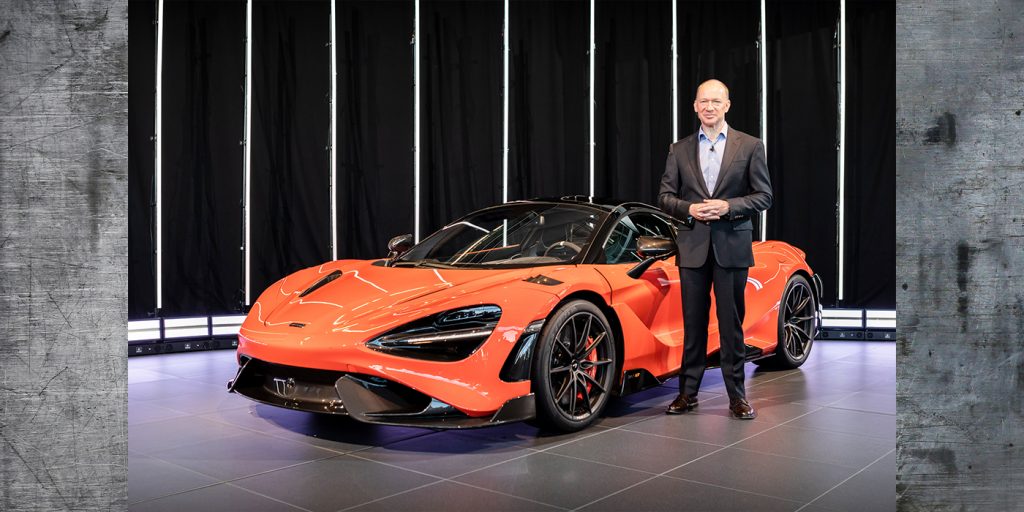 Mike Flewitt, McLaren Automotive CEO, has confirmed that the company will continue to pursue its engineering philosophy of reducing vehicle weight to further enhance the performance and efficiency of its supercars. Already evident in existing models such as the new 765LT, the ongoing drive for weight reduction will put McLaren in the best possible position to embrace powertrain advances such as hybridization and electrification, says Flewitt.

Flewitt delivered the message that McLaren’s determination to win “the weight race” remained undiminished in an abbreviated version of an address he had been due to give at the 2020 Automotive News World Congress, an automotive industry event postponed because of the Covid-19 crisis.

“Reducing vehicle weight is at the center of our strategy for the next generations of McLaren supercars. We are already class-leading and committed to further driving down weight in order to be in the best possible position to maximize the efficiency and performance of hybridized models to be introduced by 2025.

“Vehicle mass is the enemy of performance whether a car has a conventional internal combustion engine or a fully electrified powertrain, so winning the weight race is an absolute priority for us – and one of the reasons McLaren Automotive has invested heavily in the McLaren Composites Technology Centre, our own U.K. composite materials innovation and production facility.”

The commitment to continue minimizing weight comes as a new, limited-volume McLaren supercar comes to market with an 80kg* reduction integral to a lightest dry weight of just 1,229kg. The 765LT opens a fourth chapter in the McLaren Longtail story and embodies characteristics that have their roots in the legendary McLaren F1 ‘Longtail’ race cars of the late-1990s, with driver engagement, increased performance, lighter weight, track-focused dynamics and limited availability key features.

Even with the inherent benefit of a carbon fibre Monocage II structure at the car’s core, lighter weight set the biggest challenge for the 765LT development team. The new LT needed to be as light as possible in order to achieve the astonishing straight-line performance and cornering and braking abilities expected of a McLaren ‘Longtail’ and considering that the McLaren 720S – the car on which the 765LT is based – set a new benchmark for weight in the supercar class when it was introduced in 2017, an 80kg reduction in DIN weight is a remarkable achievement, McLaren says.

The minimized weight is the result of a meticulous program of changes from the inside out, demonstrating a philosophy embedded in McLaren’s history as a pioneer in carbon fibre technologies since introducing the first carbon fibre chassis into Formula 1 in 1981. The 765LT makes extensive use of the lightweight but incredibly strong material, including for exterior body panels, aerodynamic components and inside the car, for the seats and center tunnel. Several of these components are fabricated at the McLaren Composites Technology Centre in Yorkshire, U.K. – the first time the new facility has created body components for a McLaren road car.

Other weight-saving measures on the 765LT include lightweight side windows and motorsport-style polycarbonate glazing at the rear of the car, with Formula 1-grade materials used in the transmission. The exhaust system – which is fully-formed in titanium – delivers a substantial 40% weight savings over a comparable steel system, with the quad-exit exhaust also tuned to provide a searing soundtrack appropriate for a car with this level of performance and driver engagement: with its light weight and a 765PS, 800Nm twin-turbo V8 engine, the 765LT can accelerate from standstill to 200km/h (124mph) in just 7.2 seconds.

The 765LT’s track-tuned suspension has also been designed with minimal weight in mind, with features such as motorsport-derived ‘helper’ springs that negate the need for a heavier, dual-rate sprint arrangement. Ultra-lightweight wheels, bespoke Pirelli P-Zero Trofeo R tires and titanium wheel bolts together bring a savings of 22kg, a reduction in unsprung mass that also enhances dynamic performance.

Only 765 individually-numbered examples of the new Longtail will be built to customer order globally.