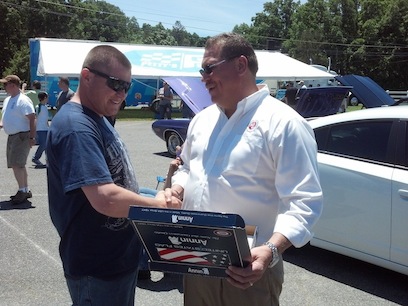 In appreciation of this support, Anderson flew a U.S. flag over FOB Geronimo in Afghanistan on ALI’s behalf.

Anderson presented that flag to R.W. “Bob” O’Gorman, ALI president, at the Petty’s Garage Spring Fling Car Show in Level Cross, N.C., while on leave May 25. The flag was accompanied by a United States Marine Corps certificate, which states: “This certifies that the accompanying United States flag was flown over FOB Geronimo, amid the battlefields of Afghanistan, during the decisive operations against enemy forces in Helmand Province of Afghanistan on 15 March 2013. Presented to Automotive Lift Institute.”

O’Gorman, himself a Gulf War veteran, said he was honored to accept the flag on ALI’s behalf and plans to frame it with the certificate for display in the organization’s Cortland, N.Y., headquarters.

“To think that a small gesture made through the ALI Facebook page inspired a Marine to fly this flag on our behalf while serving in harm’s way and then to carry it home to personally give it to us is truly humbling,” O’Gorman said. “We thank Gunnery Sgt. Anderson for his service to our country and for taking the time to be with us.”