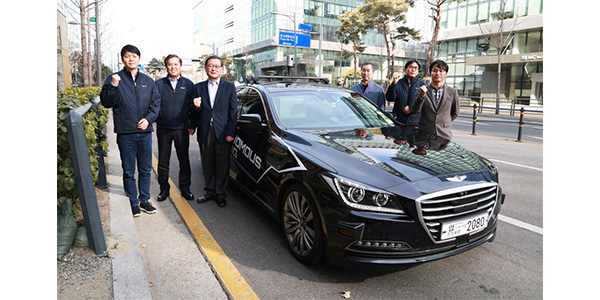 CEO Chung Mong-Won (third from left), chairman of the Halla Group, is taking a picture for commemoration with developers including President Il-Hwan Tak (second from left) after successfully completing level 4 autonomous driving in January.

Mando Corp., an affiliate of Halla Group specializing in car components, announced it has successfully tested level 4 autonomous driving. Accordingly, the company says it has taken one-step forward in perfecting autonomous driving and developing the technology for commercial use.

Level 4 autonomous driving is full self-driving automation, according to the standard classification provided by the U.S. National Highway Traffic Safety Administration, referring to a car that is designed to drive to its destination for itself without intervention of drivers.

“Hockey,” a car for which Mando obtained an autonomous driving testing permit from the Korean Ministry of Land, Infrastructure, and Transport in 2017, digested left turn, right turn and lane change as well as linear and curve driving without any difficulty while receiving signals from front and corner radars, front cameras and surround cameras, which were developed by Mando, and lidar, the company has reported.

The Pangyo demonstration section is considered extremely unfavorable for autonomous driving. The route has many illegally parked vehicles and large amount of reflected sunlight from high-rise glass buildings, different from the stable real operation environments in California or Arizona, where many autonomous driving car tests are conducted, as well as the closed driving environments such as test tracks.

“Hockey” also showed vehicle-object communication (V2X) technology, a technology essential for autonomous driving, while passing through crossroad by receiving and perceiving information such as crossroad signals in advance from telecom companies using vehicle-infra (V2I) communication technology, in particular, on this day.

Managing Director Gyu-Sik Park, head of Mando Advanced-Development Center, said, “Mando has secured a perfect autonomous driving technology enabling safe driving even in congested downtown roads,” and added, “We are going to achieve an autonomous driving commercialization level by reinforcing the AI technology by 2021 and by cooperating with domestic and overseas partners.”

Autonomous driving requires the sensing organs (hardware) to perceive external situations as if a human is driving and the information processing ability (software) to judge and act based on this obtained information, and Mando is one of the few global enterprises that supply both.

Advertisement
In this article:Autonomous Driving
Print
Up Next: