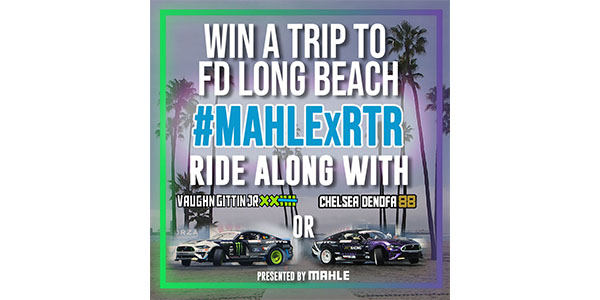 The contest will offer a grand-prize trip to Formula Drift Long Beach and a ride-along with RTR drivers Vaughn Gittin Jr. or Chelsea DeNofa.

MAHLE Aftermarket Inc. has announced the “MAHLExRTR” Social Media Promotion featuring a grand-prize trip for the winner and a guest to round one of the 2019 Formula Drift championship April 4-5 in at Long Beach, California. The winner also will experience a “ride-along” with RTR Motorsports Drift Team drivers Vaughn Gittin Jr. or Chelsea DeNofa.

Ten additional winners will receive a MAHLE/RTR Drift Team merchandise prize package. Contestants may enter by “liking” and “reposting” the MAHLExRTR promotional video or any other promotional content that appears on MAHLE, RTR, Vaughn Gittin Jr. and Chelsea DeNofa’s social media channels, using the hashtag #MAHLExRTR. The deadline for entry is 11:59 p.m. EDT on Thursday, March 14.

“MAHLE is excited to partner with Team RTR to offer fans a chance to win a trip to Formula Drift Long Beach and go for the ride of their life,” said Jon Douglas, president of MAHLE Aftermarket North America. “We’re also proud that Vaughn and Chelsea are putting their trust in MAHLE engine components to help them chase the 2019 FD Championship.”

RTR Motorsports founder, Gittin Jr., is one of drifting’s most iconic figures, with the second most wins in Formula Drift history (10) and 22 career podiums. DeNofa joined RTR in 2017 and won the Xtreme Drift Championships in 2010 and 2011.

The MAHLExRTR Social Media Promotion is open to residents of the contiguous United States only. The grand-prize winner and guest must be older than 18 years of age. Winners will be selected and announced on March 15.

For more information about MAHLE Aftermarket and its brands, visit mahle-aftermarket.com or contact your local sales representative.

Advertisement
In this article:Giveaways, Mahle Aftermarket
Print
Up Next: