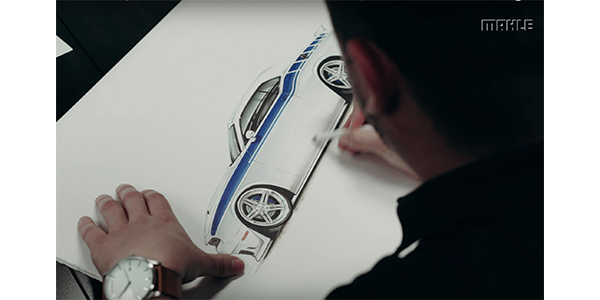 The Challenger is the grand prize in the company’s 2019 “Drive with the Original” promotion.

The first in a series of videos has been posted to the MAHLE Aftermarket North America YouTube Channel documenting the custom build of an 1,100-HP Dodge Challenger at Petty’s Garage, the grand prize in the 2019 MAHLE “Drive with the Original” Technician Promotion. This one-of-a-kind vehicle will be awarded to a lucky technician at AAPEX 2019, taking place Nov. 5-7 in Las Vegas.

“For the first year of the promotion, we featured a new 1,000-HP Mustang and followed that up with a one of a kind 800-HP resto-mod Camaro last year,” said Jon Douglas, president, MAHLE Aftermarket North America. “With this year’s grand prize, we’re going to complete the ‘Detroit Three’ and another classic piece of American Muscle with Dodge and asked Petty’s Garage to build an 1,100-HP Hemi powered Challenger. We feel this is going to be a real showcase for our family of MAHLE gaskets, filters, pistons and rings, as well as our Clevite engine bearings.”

The video series will take viewers behind the scenes at Petty’s Garage in Level Cross, North Carolina, to see the details of how the craftsmen work their magic. From design considerations, to the engine build, to testing the finished vehicle on the dyno, the video series promises to capture many highlights from the build.

The “Drive with the Original” promotion kicked off on March 1, 2019, and runs through Oct. 1, 2019. Four finalists will be randomly selected from all entries to receive a trip for two to AAPEX in Las Vegas. The “Original,” Richard Petty, will be present when the finalists each select a key from The King’s signature Charlie One Horse hat – one of which will start the grand prize MAHLE Dodge Challenger from Petty’s Garage.

Advertisement
In this article:Mahle, Petty's Garage
Print
Up Next: