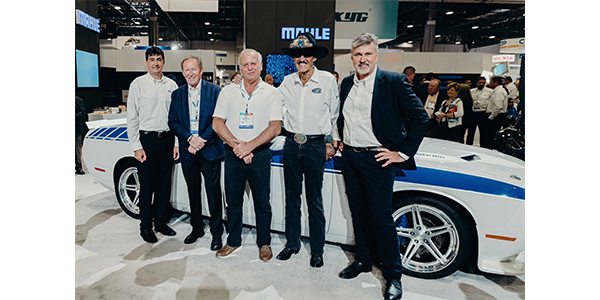 Jim Pickles, a technician at J and J Automotive, Inc. in Rhinebeck, New York, was the Grand Prize winner of the 2019 MAHLE “Drive With the Original” promotion.

Jim Pickles, a technician at J and J Automotive, Inc. in Rhinebeck, New York, was the Grand Prize winner of the 2019 MAHLE “Drive With the Original” promotion. He was awarded a Petty’s Garage supercharged Dodge Challenger on the first day of this year’s Automotive Aftermarket Product Expo (AAPEX) in Las Vegas.

Motorsports legend Richard Petty was on hand to present each of the four finalists with the opportunity to draw a key fob from his signature Charlie One Horse cowboy hat – one of which unlocked the doors of the 1,100-horsepower Challenger.

“I was on pins and needles when it was my turn to pick the fob from Richard Petty’s hat,” said Pickles. “When I approached the car and pressed down on the fob, I never believed it would actually work. I’ve never won anything like this in my life!”

“On behalf of the entire MAHLE family, I want to congratulate Jim for being the Grand Prize winner of this awesome car!” said Jon Douglas, president, MAHLE Aftermarket North America. “I had the opportunity to drive this machine, and I didn’t want to get out! We also want to thank the other three finalists, as well as the thousands of technicians around the country, for supporting the ‘Drive With the Original’ promotion and placing their trust in the MAHLE brand.”

The four finalists were randomly selected from entries submitted since the launch of the promotion earlier this year in March. The four finalists each received a trip to Las Vegas to participate in the special grand prize ceremony held at the MAHLE Aftermarket exhibit on the opening day of AAPEX 2019.

Pickles is still in disbelief that he is the Grand Prize winner of this one-of-a-kind, customized vehicle from Petty’s Garage. Being able to meet “The King” himself in person in Vegas was a bonus.

“I cannot wait to bring the Dodge Challenger home to show it off to all my friends and family, and especially my co-workers,” said Pickles. “I think I can safely say that Christmas came a little early for me this year, and I am forever grateful to MAHLE for sponsoring this one-in-a-lifetime promotion!”

In addition to the grand prize, hundreds of instant win prizes were awarded in the promotion, including Richard Petty Driving Experiences, Richard Petty-autographed Charlie One Horse cowboy hats, and No. 43 diecast model cars.