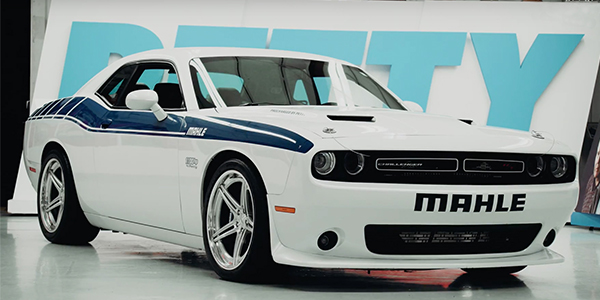 The four finalists will travel to the 2019 Automotive Aftermarket Product Expo (AAPEX) in Las Vegas, where one of them will win the grand prize, a custom-built Petty’s Garage Dodge Challenger.

The four finalists for the MAHLE “Drive With the Original” technician promotion have been selected for this year’s grand prize drawing. These four finalists will travel to the 2019 Automotive Aftermarket Product Expo (AAPEX) in Las Vegas, where one of them will win the grand prize, a custom-built Petty’s Garage Dodge Challenger.

The grand prize ceremony will take place at the MAHLE Aftermarket booth, No. 2661, at 4 p.m. on Nov. 5. The “Original,” Richard Petty, will be present when the finalists each select a fob from his signature Charlie One Horse hat – one of which will unlock the doors of the modified, 1,100-horsepower supercharged Challenger from Petty’s Garage.

The four finalists for the MAHLE “Drive With the Original” promotion are:

“We’re happy to announce these four finalists who will have a chance to win this spectacular Dodge Challenger built by Petty’s Garage,” said Jon Douglas, president of MAHLE Aftermarket North America. “My heart raced when I first cranked this beast up to take it for its inaugural test drive! One of these finalists is going to get a very special car.

“I would also like to express sincere appreciation on behalf of MAHLE Aftermarket to the thousands of technicians around the country that participated in the promotion, and more importantly, for trusting MAHLE components in the work they perform.”

The four finalists were randomly selected from the entries received and have been awarded a trip to Las Vegas to participate in the special grand prize ceremony on Nov. 5, the opening day of AAPEX 2019. In addition to the grand prize, instant-win prizes were awarded in the promotion, including Richard Petty Driving Experiences, autographed Richard Petty signature Charlie One Horse cowboy hats and autographed #43 die-cast model cars.

Advertisement
In this article:Mahle
Print
Up Next:

MAHLE Aftermarket Announces Finalists For 'Drive With The Original'