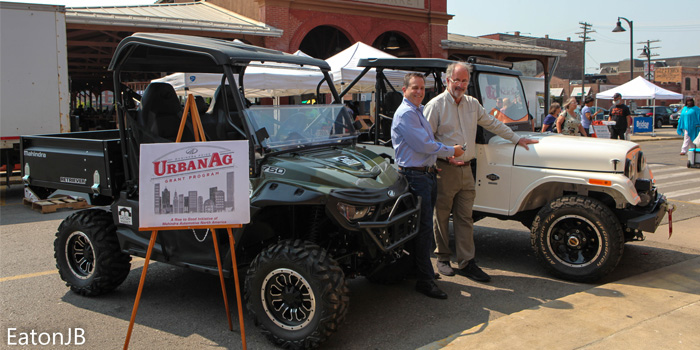 The two Mahindra vehicles will soon roam the Eastern Market sheds, transporting produce and supplies throughout the market. Eastern Market is a historic commercial district in Detroit. 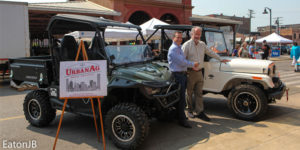 Continuing its support of urban and sustainable farming in Detroit, Mahindra Automotive North America has presented the non-profit Eastern Market Corp. with two new work vehicles. The two Mahindra vehicles, collectively named the “Mahindra RISES for Good Food Fleet,” will soon roam the Eastern Market sheds, transporting produce and supplies throughout the market, and will become a site common to the roughly 1 million visitors the Eastern Market draws each year to its weekly Saturday and Tuesday public markets.

Among the vehicles awarded is a ROXOR, an all-new off-road vehicle assembled in Metro Detroit that Mahindra launched just this March. Featuring a steel body on a boxed-steel frame, the Eastern Market ROXOR will handle a variety of demanding tasks on site while the second vehicle awarded – the Mahindra Retriever 750 UTV – will help provide more than 250 market vendors with a quick way to load and transfer goods between stalls.

Dan Carmody, president of the Eastern Market Corp., stated, “We are excited to be a 2018 awardee of Mahindra’s Urban Agriculture Grant Program. Mahindra’s commitment to supporting urban ag producers is inspiring. We look forward to building a stronger ecosystem for urban producers with support from Mahindra over time and look ahead in the short term to using Mahindra’s cool vehicles to better serve urban ag producers and their customers at Eastern Market on a daily basis.”

“Eastern Market’s mission is to improve access to healthy, green, affordable and fair food choices in Detroit and throughout Southeast Michigan – this lines up perfectly with the work our grant initiative was created to support,” said Richard Ansell, Mahindra Automotive North America’s vice president of marketing.

Since 2015, Mahindra’s Urban Agricultural Grant Program has awarded more than $400,000 in cash and equipment to support sustainable non-profit farming operations and initiatives in and around Detroit. Among other things, these Mahindra grants have been responsible for growing more than 1.25 million pounds of produce for Detroiters, building public equipment sheds, creating agricultural job opportunities for developmentally challenged young adults and distributing more than 200,000 seedlings across 1,600 Detroit gardens. Mahindra Automotive North America says it is proud to welcome Eastern Market as the newest of the 13 distinct non-profit agricultural organizations it has supported in Southeast Michigan, and looks forward to all the help these vehicles will provide as Eastern Market continues to serve as one of Detroit’s greatest institutions.

Advertisement
In this article:donation, Mahindra
Print
Up Next:

HELLA Honors Sales Representative Of The Year
Connect with us