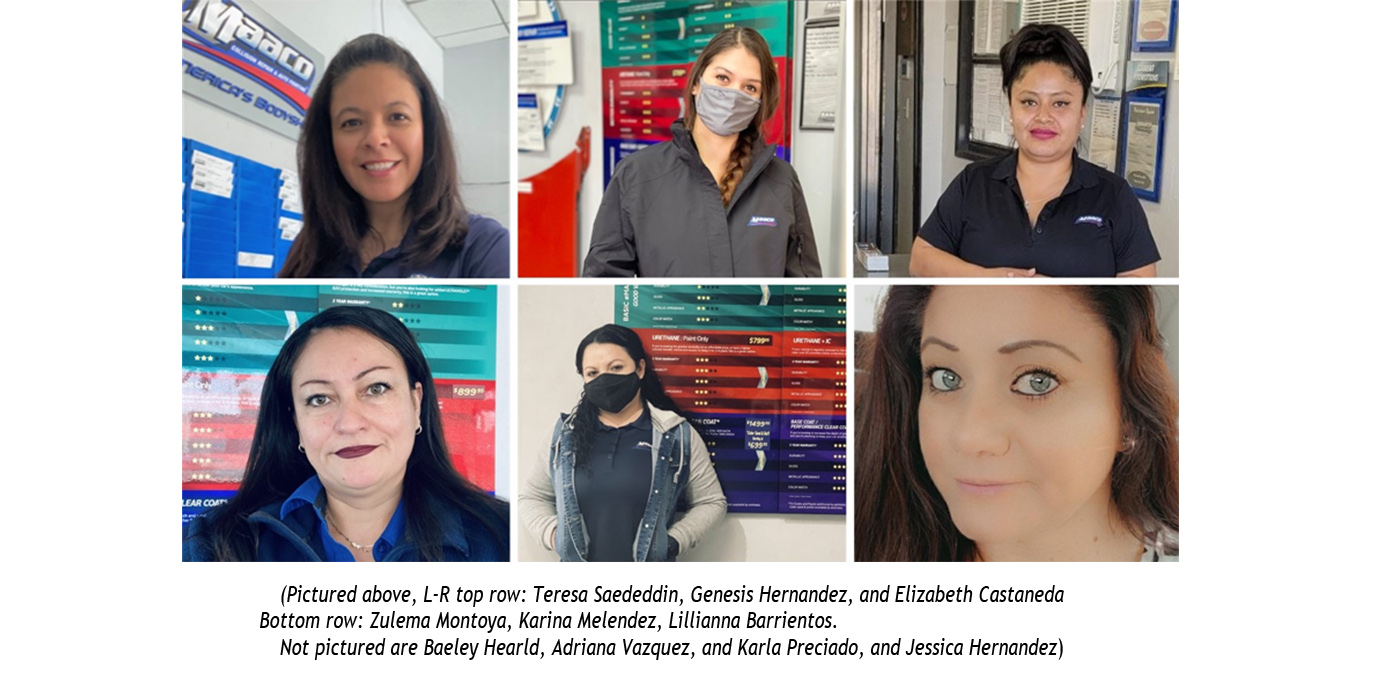 The company is honoring successful female leaders within the franchisee network.

In the automotive repair and painting industry where the roles have been predominately male, many women throughout the Maaco family have found successful careers as owners, managers, estimators and technicians with Maaco Collision Repair and Auto Painting, the leader in the $43 billion automotive paint and collision industry.

Joe and Aundrea Taormina, owners of J&A Companies Inc., purchased 19 Maaco locations in the California market nearly two years ago. Of the 19 locations, nine of the general managers, and his regional manager are female. Taormina’s organization is just one example in the Maaco network where women have come to play significant roles in the overall success of Maaco.

“Right away I saw that she was a very good manager,” said Taormina. “She was extremely knowledgeable, she ran a tight ship, and she produced good numbers – so much so that I have since promoted her to regional manager.

“In our company, everyone has the same opportunity,” said Taormina. “We select the best people for these roles, and in these situations, they just happened to be women. Most of them have started as estimators, and through hard work and dedication, have progressed to assistant managers and onto general managers. These women are good leaders – focused, extremely dedicated and are some of my best managers.”

None of these managers came from an automotive background or had automotive training. They all came to Maaco through different circumstances, started in entry level positions and quickly worked their way up to location general managers.

Prior to working at Maaco, Karina Melendez, general manager of the Van Nuys location, brought her 2016 Honda Civic in for an estimate.

“They were in need of an office manager, and as we talked, they asked if I would be interested,” said Melendez. “I interviewed later that day and was hired. That was three years ago. I have since moved to estimator, assistant manager and am now general manager.”

Zulema Montoya started at age 17 answering phones at the Maaco in Glendale, California. She liked the work environment and began to learn more and more. Some 15 months later she has worked her way up to general manager of that location.

Baeley Hearld was first hired to clean the shop on Saturdays. When she asked for more hours, she was offered the job as a detailer. She took that job, and continued to learn and progress, spending two years doing various production jobs in the shop. She worked her way into the front office as fleet estimator and assistant manager. She even spent a year working for the Maaco ops team as the southwest region coach, assisting with both production and office operations. Herald is currently the general manager of the Fresno, California, location.

Several of the managers stated that there is the occasional customer who comes in and expects to see a man give them the estimate. But once they see the women are professional, knowledgeable and have great attention to detail, they quickly come to respect the fact that a woman can do the job and do it well.

“When a man comes in for an estimate, you sometimes get the ‘deer in the headlights look’ when I tell them that I will give them the estimate,” said Teresa Saededdin, general manager of the Lancaster, California, location. “But seeing a female makes our female customers feel more at ease. I recently read an article that states that 9.7 percent of employees in the automotive repair and maintenance industry in 2018 were women. The article also stated that two-thirds of vehicle maintenance jobs are done for women. So, we are making progress but have a way to go to be properly represented in the industry.”

Elizabeth Castaneda, general manager in Downey, California, described how she sees her job, which was shared by several of the managers.

“I love my job. I love coming to work every morning and have my morning meetings with my team, reminding them that we work as a team, we work as family and we are all aiming for one thing – customer satisfaction,” said Castaneda.

“The two things I like most about my job is seeing the look of satisfaction on the customers’ faces when they pick up their cars,” said Genesis Hernandez, general manager in Fresno. “And it also feels great to show that women can do anything they set their mind to.”

Advertisement
In this article:International Womens Day, MAACO
Print
Up Next:

PPG Honors Names Platinum Distributor Of The Year
Connect with us