The Bush administration and congressional Democrats have reached a compromise in principle to provide $15 billion in loans to the Detroit 3 automakers. 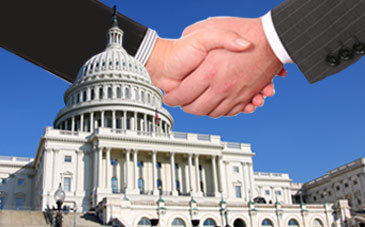 The deal would provide General Motors (GM) and Chrysler with the amount of money they claim to need in order to stay in business through March 31 — $14 billion. The two automakers could receive an additional $1 billion if conditions worsen. As part of their agreement, GM and Chrysler must give the government stock or warrants for a majority stake in their businesses; they must also restrict corporate pay and end corporate jet travel.

Ford has said it does not need a loan, but has requested a $9 billion credit line. Commenting on its request, Ford issued the following statement Monday: “As we told Congress, Ford is in a different position. We do not face a near-term liquidity issue, and we will not be seeking a short term bridge loan. But Ford fully supports an effort to address the near-term liquidity issues of GM and Chrysler, as our industry is highly interdependent and a failure of one of our competitors could affect us all.”

The funds would be lent to the automakers by a federal overseer, or so-called “Car Czar.” A Detroit Free Press report stated that if General Motors and Chrysler don’t make the cuts and reach deals with their creditors and the union by March 31, the overseer has the right to recall any loans, essentially forcing the automakers into bankruptcy. The draft bill will provide only one 30-day extension for the automakers and also bars them from attempting to receive funds from any other government program.

At a press conference held Monday, Speaker of the House Nancy Pelosi commented, "We want to be able to review the performance of the auto companies as we go forward. In order to do that, it is important for us to pass legislation that will set criteria for restructuring and reorganization of that industry and the companies within it.
"It is important to note that unless the restructuring that is called for in this legislation and the goal of viability is achieved by March 31, there is no justification for spending any more taxpayer dollars,” Pelosi said. She added that while the government should be able to use TARP funds, the White House doesn’t agree, which is why the automakers are getting so much less than the $34 billion they originally requested.