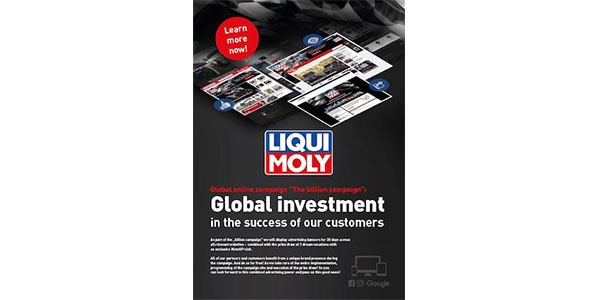 In conjunction with the new ad campaign, LIQUI MOLY also has launched a competition, in which trips to Malaysia, the U.S. and Germany, each including a visit to the MotoGP Motorcycle World Championship, are available as prizes. 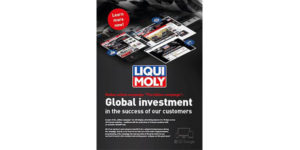 For the first time in its history, German oil and additive specialist LIQUI MOLY is launching a global advertising campaign. The company says it expects to reach a billion contacts on the internet and on Facebook with this campaign. “We are telling people that LIQUI MOLY is the oil brand that the car drivers in Germany have chosen as the best,” says CEO Ernst Prost. “This allows us to boost demand for our dealers around the world.”

The advertisements are will be distributed via Google, Facebook and Instagram. They are available in 50 languages and will be visible in 128 countries.

In conjunction with the new ad campaign, LIQUI MOLY also has launched a competition, in which trips to Malaysia, the U.S. and Germany, each including a visit to the MotoGP Motorcycle World Championship, are available as prizes. “With it we are going to greatly increase our brand recognition – particularly in countries in which LIQUI MOLY is not yet very well known,” says Prost.

This is the first time the oil and additive specialist has launched a global campaign, and will be the biggest audience that LIQUI MOLY has ever reached, the company says. The campaign will be centrally run and paid for from Germany.

The core message is that LIQUI MOLY has once again been voted the best oil brand by readers of numerous German car magazines. “The campaign is also an invitation to better to get to know LIQUI MOLY,” says Prost. “We stand for quality made in Germany. We exclusively produce our oils and additives in Germany.”

The ad campaign will begin in October.

Advertisement
In this article:ad campaign, LIQUI MOLY
Print
Up Next: