The German motor oil manufacturer LIQUI MOLY is investing 11.6 million Euros ($16 million) to build new tank storage facilities and expand its oil plant. The tank farm will be constructed at the inland waterway harbor of the City of Dillingen just a few kilometers away from the oil plant.

ULM, Germany – German motor oil and additive specialist LIQUI MOLY has announced it is making its largest investment in years. The company is spending 11.6 million Euros ($16 million) for a new tank farm in the vicinity of its oil plant as well as expanding production there. 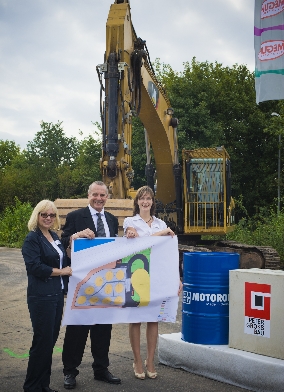 "This is a major step for our mineral oil plant and for the employees in the company," said Ernst Prost, manager and proprietor of LIQUI MOLY, at the cornerstone laying ceremony.

The tank farm will be constructed at the inland waterway harbor of the City of Dillingen just a few kilometers away from the oil plant. The 10 tanks with a volume of 1.800 cubic meters each supplement the storage capacity already present on the oil plant grounds. The tank farm will cost 8 million Euros ($11 million) and is scheduled to begin operation in the summer of 2012.

"An absolutely essential investment," Prost added. "Without it, we could not continue our growth to the extent planned."

Currently, LIQUI MOLY records turnover growth in the two-digit percentage range. The company was elected the most popular motor oil in Germany this year. However, further growth is anticipated particularly in other countries, the company says, not primarily in the domestic market in Germany. This is where the U.S. plays a special role, according to the company. This is one of LIQUI MOLY’s most important export markets and turnover in the U.S. is increasing continuously in the two-digit percentage range as well, the company says.

"It would be almost impossible to fulfill these plans without the new tank storage facilities," Prost said.

Another reason for this construction project: The additional storage capacity for 18 million liters make the motor oil manufacturer less dependent on price variations on the crude oil market.

"Construction of the tank farm is a clear commitment to our ‘Made in Germany’ production policy," asserted Prost.

LIQUI MOLY produces exclusively in Germany, to ensure that the same high-quality is offered the world over. Approximately 30 new jobs will be created in the course of building the tank farm.

"People are essential for our growth plans and strategies. Naturally, the tank farm is important, but it also requires people for its operation. Without employees, not one single hinge moves," Prost said.

The LIQUI MOLY Group current employs a staff of 557. When the tank farm is put into operation, it will no longer be necessary for tank trucks to drive hundreds of kilometers several times each day from the refineries in the Netherlands and Belgium to the oil plant; then only one inland river barge will be required every two weeks. Trucks will then only have to drive the last few kilometers from the tank farm to the oil plant.

"The tank farm will therefore provide a positive contribution to preserving our environment," added Prost.

Simultaneously, with construction of the tank farm, the oil plant itself will be expanded: More storage area will be created, additional mixing vessels and storage tanks will be installed and production optimized. The investments at the plant amount to an additional 3.6 million Euros ($5 million). Production will continue during the construction work.

"With these investments we will be well situated to continue along our road to success and make the LIQUI MOLY brand as strong in other countries as it is in Germany," stated Prost.