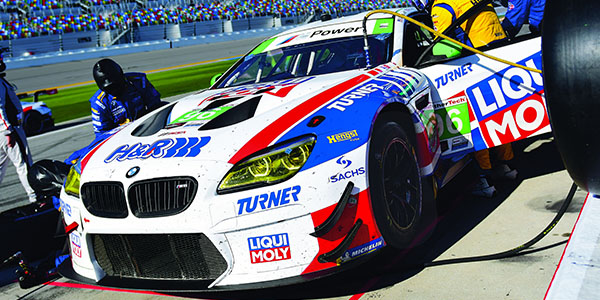 LIQUI MOLY is the official lubricant of the race team, of Turnermotorsport.com and of ECSTuning.com.

LIQUI MOLY, the German oil and additive specialist, is extending its cooperation with Turner Motorsport for the IMSA WeatherTech SportsCar Championship, the IMSA Michelin Pilot Challenge Series and the SRO GT World Challenge America Championship. “This is a perfect addition to our international commitments in Formula 1 and MotoGP,” said Sebastian Zelger, CEO of LIQUI MOLY USA/Canada.

Turner Motorsport relies on BMW models in the three racing series, namely the M6 GT3 and M4 GT4. LIQUI MOLY made its mark in the USA as the oil specialist for German imports. These cars require special formulations instead of oil with the usual API specification. “Although we already have many oils specifically for domestic models, German imports remain an important part of our success story in the USA,” said Zelger. “Because we have the motor oils that have been officially approved by BMW, Volkswagen, Audi, Mercedes and Porsche for their vehicles.”

Working with Turner Motorsport is not just about logo presence during the races. LIQUI MOLY is the official lubricant of the race team, of Turnermotorsport.com and of ECSTuning.com, and is used exclusively in the race shop, bricks-and-mortar service shop, at all events in the racing series, and in all race cars. This collaboration is now entering its fourth year. “We are delighted that the team at Turner Motorsport is so convinced of the quality of our product,” added Zelger.

Will Turner, team principal: “LIQUI MOLY is ‘everywhere’ and has posted record sales numbers recently. I can’t think of a better partner to be with for 2021.”

The Daytona 24h at the end of the month kicks off this season. The BMW M6 GT3 will be seen there for the first time in the LIQUI MOLY look. “A 24-hour race is the ultimate test for motor oil,” said Zelger. “An oil that proves itself there also delivers top performance and reliably protects the engine off the race track.”

Daytona is of particular importance for LIQUI MOLY. The brand appeared there for the first time in 1980. Back then, the LIQUI MOLY Porsche 935 won the 24-hour race with a lead of 33 laps. Zelger commented, “I am keeping my fingers crossed for the team with its drivers Bill Auberlen, Robby Foley, Aiden Read and Colton Herta and hope that they can repeat this historic success.”