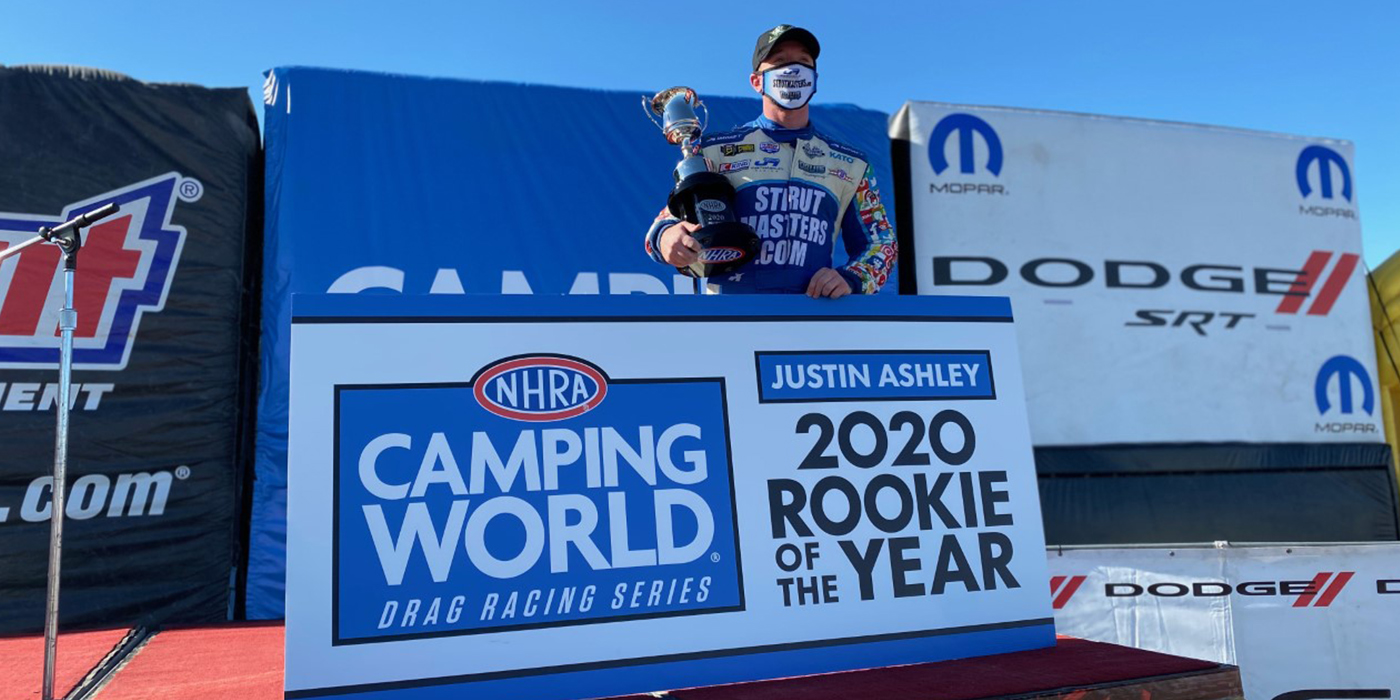 Ashley is one of the first to run King Engine Bearings’ new Top Fuel bearings in his 10,000+ horsepower engine.

King Engine Bearings’ Top Fuel Ambassador, Justin Ashley, was named Rookie of the Year by NHRA for 2020, completing a top-notch year for himself and his team. Ashley is one of the first in the world to run King’s brand new Top Fuel bearings in his 10,000+ horsepower 500 CI Chrysler Hemi engine.

King Engine Bearings has just introduced its uniquely designed Top Fuel (TFC) bearings featuring a strengthened steel back as used in King’s aviation bearings, a special ductile bronze intermediate layer and a King designed and applied polymer coating to keep the bearings and their rotating assembly intact even under the extreme load and heat conditions of Top Fuel racing.

“Top Fuel engines produce terrific loads, especially on connecting rod upper bearing shells,” said Ron Sledge, King’s performance and technical manager. “In the past, conventional Top Fuel rod bearings would extrude, causing the wall thickness to reduce by several thousandths. This would cause losses in oil pressure and vital oil film thickness, producing rapid wear and possible component damage. That’s the reason we came up with a superior bearing material (TFC) designed to address those issues and preserve the engine.”

Ashley, at just 25 years old, is well acquainted with the world of NHRA racing. He is a second-generation racer, as his father, Mike Ashley, is a three-time NHRA Funny Car winner.

On top of Ashley’s victory in the Summernationals, he also managed to qualify in all 11 races of the season, secure 10 round wins, and lead the reaction time category. Following the announcement, Ashley said: “This is a huge honor and I have to thank my family, my sponsors and the NHRA for giving me the chance to chase my dream of being a professional Top Fuel racer. Thank you to Davis Motorsports, Chip Lofton at Strutmasters.com, Manscaped, Auto Shocker, Kato, Lucas Oil, King Engine Bearings, Justice Brothers, Sanit, Guardlab, Hero Soap Company, Menards and Impact. I also want to thank Mason and Kyle for having awesome rookie seasons in a tough class like Pro Stock.”

Ashley will be back for the 2021 NHRA season, looking to add even more achievements onto his outstanding Rookie of the Year season.

Advertisement
In this article:King Engine Bearings, NHRA
Print
Up Next: