Castle was the longtime dean of Aftermarket Studies at Northwood University. 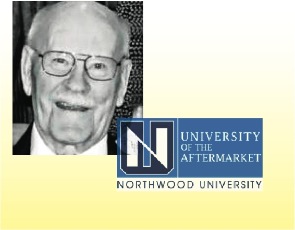 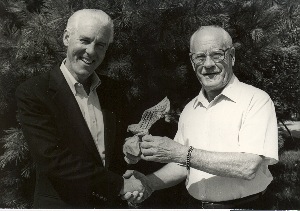 ST. GEORGE, Utah — John Noel Castle, longtime Dean of Aftermarket Studies of Northwood University until his retirement in 1992, passed away in Utah on July 28.

Those who remember Castle — including John Washbish, president and CEO of Aftermarket Auto Parts Alliance, who had Castle as a professor — said he laid the foundation for the aftermarket studies program.

"John Castle made the Automotive Aftermarket Program at Northwood University," Washbish said. "He took the helm in 1972, which was the second year of the program. He wrote the first textbooks and laid the foundation for the program on all three Northwood Campuses. In addition to educating the aftermarket students, he also taught other business courses, such as law, marketing and math. He was involved with the students and stayed involved with all of us many years after graduation. His memory will live on with hundreds of former students."

"John took the aftermarket program to the next level," Stauffer said. "He really made sure the students were connected to the industry."

"The unique thing about John was, he wore cowboy boots every day of his life — with his suits," Stauffer remembers. "It was who he was."

"His connection with the kids and the kids’ connection to the industry is what Northwood is all about," he added. "John was a great man and loved by all. He had a big impact on the industry. There are so many success stories within our industry of his former students. They are too numerous to count."

Dr. Keith Pretty, president and CEO, Northwood University, said, "We are deeply saddened by the loss of a great businessperson, educator and ‘founder’ of hockey at Northwood. His efforts produced lasting change in the lives of countless students and staff who remember him fondly."

Castle came to Northwood in 1972. He chaired the school’s automotive replacement management department on the Michigan Campus and held the rank of associate professor. While at Northwood, Castle also authored four textbooks and continued to participate in update seminars for the aftermarket industry throughout the United States and Canada.

Castle started the men’s hockey program at Northwood. In the early days of the program, Castle’s wife, Audrey, would launder and help feed the team as well as stitch the numbers and names on the jerseys.

Castle was awarded the Northwood University Automotive Aftermarket Management Education Award in 1992. His citation read: "For the last 20 years, John N. Castle has had a profound effect on Northwood Institute. Until his retirement in August, he educated, counseled, and encouraged thousands of students, many of whom have gone on to great success with ready acknowledgement of his influence. John Castle has had many roles at Northwood. As a faculty member he taught a variety of classes; as an administrator he served as the dean of the college’s Texas area where he was influential in bringing the campus to full academic fruition. In his role as dean of Northwood’s automotive aftermarket program, he worked tirelessly to recruit not only student but industry support for Northwood’s unique curriculum."

The John N. Castle Endowed Scholarship was established in 1992 to aid students enrolled in the automotive aftermarket program.

His full obituary appears below.

John Noel Castle
John Noel Castle, passed peacefully on in his sleep, July 28, 2010. He was born Dec. 24, 1924, in England to Archibald and Kathleen Castle. He married Jean Conner (deceased 1955) in England and then Audrey McLeod (deceased Oct 2009) in Canada.
His warm and friendly character will be greatly missed, as well as his subtle British humor. As a youth he was quite athletic.

Even in his fifties he could still beat his university students in racquetball. Eager to serve, he entered the Royal Air Force during WWII being under the minimum age. He received a medal of honor from King George VI for his bravery in dislodging a bomb which was stuck in the bomb bay. John worked in the automotive aftermarket for years, and became a professor of Northwood University in his forties.

His innumerable hours of love and service to friends, Northwood University students, community and family have verified his golden heart to "love thy neighbor".
John and Audrey loved to travel, John at the steering wheel and Audrey always and only in the passenger seat. His favorite food? Shortbread and gingersnaps cookies! Oh, if we all could live to be 85 and eat as many cookies as he did! To do as he always said, this tale of his life will be "short and sweet, please!" The true love he expressed to his family will forever stay in our hearts.

John is survived by his three children: Jane (Dodd) and David of Arlington, Virginia, Pamela (Somers) and Richard of St. George, Utah, John Peter and Marie-France Castle of Kelowna, British Columbia plus eight grandchildren and four great grandchildren whom he loved and was so proud of.

Many thanks for the love and care from Zion’s Way Hospice, Beehive Homes, Sterling Court and friends.

In lieu of flowers the family has requested memorials be sent to THE JOHN CASTLE ENDOWED SCHOLARSHIP, Northwood University, 4000 Whiting Dr., Midland, Michigan 48640-2398.

Flying Taxi Cabs in the Near Future?