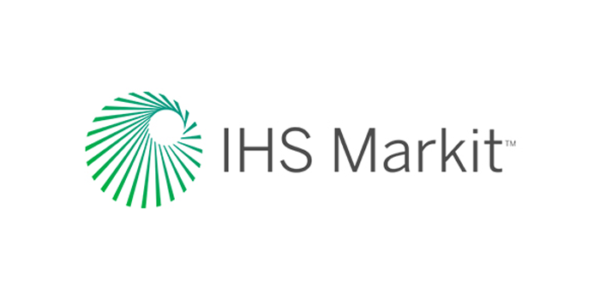 North America stands out in the latest forecasts as a solid growth market in both years, with an expected uptick of 11 percent in Class 4-8 registrations volume this year and a further increase of 9 percent in 2019.

The global market for new commercial vehicles has shaken off its first-quarter weakness and is now expected to rebound to a new unit-sales peak by the end of the year, according to the latest forecast for medium and heavy commercial vehicles from business information provider IHS Markit. The forecast covers worldwide sales and registrations of trucks over six tons gross vehicle weight, roughly equivalent to U.S. Classes 4-8 combined.

This year, worldwide truck demand is on track to approach 3.2 million new vehicles sold, up a projected 1.6 percent from 2017’s record-setting 3.1 million units. Most major markets are supporting the upswing, including India (projected up 18 percent from the prior year) and Eastern Europe (up 16 percent). Headwinds, meanwhile, are coming largely from China, the world’s largest truck market, albeit somewhat less than before, according to IHS Markit.

While sales into China’s enormous for-hire general-freight market continue to drift down, the new 2018 forecast from IHS Markit is increased above earlier expectations due to ongoing strength in China’s vocational markets. Sales into the construction and refuse industries, for example, are each up well over 50 percent through July, lifted by infrastructure investment as well as recently announced regional clean air plans, entailing truck-fleet renewal. As a result, this year’s expected decline in China’s new-truck demand is now projected at less than 10 percent from 2017.

China’s 40 percent share of global truck sales means what goes for China has a strong influence on world demand, says the research firm. As Chinese truck sales are projected to decline further in 2019, global conditions in 2019 are projected to differ from this year’s in two respects, for a net decline globally of about 7 percent expected in 2019, according to IHS Markit forecasts.  First, this year’s market supports in China are expected to have run their course.  Second, new truck demand in Western and Central Europe is anticipated to start to slip, after peaking this year.

North America stands out in the latest forecasts as a solid growth market in both years, with an expected uptick of 11 percent in Class 4-8 registrations volume this year and a further increase of 9 percent in 2019. IHS Markit says this smoothness is partly the result of strong truck demand fundamentals, on the one hand, and of reported truck production capacity constraints on the other, which are preventing some new orders for Class 8 trucks from being delivered yet this year.

“Whatever doesn’t get built this year is going to roll off the line and turn up in next year’s registrations, making it unlikely we will see a sharp downturn in North America before 2020,” explained Antti Lindstrom, a build-side analyst for IHS Markit.

New registrations for Class 4-8 commercial vehicles in the U.S. continue to grow over 2017 volumes, with growth through June exceeding 12 percent over the same time period in 2017. Sizeable growth of 19 percent in new vehicle registrations for Class 8 trucks is attributed to the increased demand for larger commercial vehicles, a reflection of tight trucking capacity and robust economic growth, as well as full ELD rule implementation. 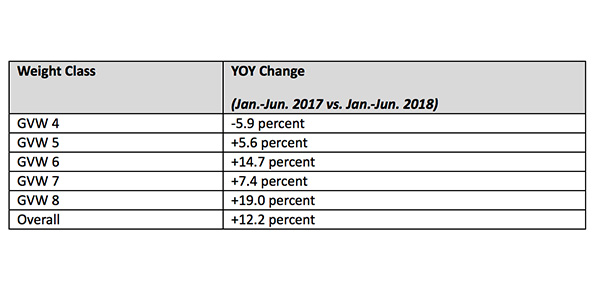 From a regional perspective, the central and northeast regions continue steady growth over prior year by an increase of 14 percent in each region – collectively, 20,000 units.

In the smaller vehicle segment, GVW 1-3 maintains strong momentum with continued growth expected in the pickup truck and van segments. New registrations within GVW 1-3 increased by 340,000 units in the first half of 2018, for a year-over-year increase of 6 percent.

“Increases in diesel and gas prices are encouraging greater acceptance of alternatively fueled vehicles,” Brusseau said. “This fuel cost pressure, together with the global demand for fuel efficient commercial vehicles, is highlighting a trend that operating greener vehicles has become a requirement to maintain a profitable advantage within the commercial market.”

Advertisement
In this article:Commercial Vehicles, IHS Markit
Print
Up Next:

Heavy Duty: Majority Of Fleet Decision-Makers In The Market For EVs