Despite the travel hurdles many faced last week as American Airlines cancelled hundreds of flights, roughly 400 aftermarket executives turned out to participate in the Automotive Aftermarket Industry Association’s (AAIA) Spring Leadership Days. The biannual gathering of AAIA leadership and industry volunteers took place April 9-11 in Bonita Springs, Fla. In addition to the more than 25 AAIA market segment and committee meetings that took place during the event, the association held its annual Volunteer Recognition Luncheon and State of the Association address on Thursday, during which Jerry O’Pry kicked off his term as chairman of the AAIA Board of Directors for 2008-2009.

In addition to the more than 25 AAIA market segment and committee meetings that took place during the event, the association held its annual Volunteer Recognition Luncheon and State of the Association address on Thursday, during which Jerry O’Pry kicked off his term as chairman of the AAIA Board of Directors for 2008-2009. O’Pry is president of Blue Magic, Inc., headquartered in Conroe, Texas.

During the address, O’Pry and AAIA President and CEO Kathleen Schmatz updated attendees on the details of the association’s long-term strategic plan, which began in 2006. Formulated around what the association determined to be the top “mega issues” for the aftermarket over the coming years, the plan is centered around the themes of “leadership, connection and empowerment” and includes a number of specific goals for the next three to five years.

Schmatz also gave attendees an overview of some of the association’s recent successes, including the five year anniversary of the Be Car Care Aware campaign, a milestone 2.5 million copies of the Car Care Guide now in circulation and the landmark five year point for the ACES standard. She also noted that three more sponsors have signed up to support Right to Repair legislation, bringing the number of Congressional co-sponsors to 45, and noted that state versions of the bill are still alive in New Jersey, New York and Massachusetts.

At right: Hundreds listen as Jerry O’Pry makes his first address as the new chairman of the AAIA board of directors.

Jerry O’Pry succeeds Richard Morgan of Aftermarket Auto Parts Alliance as new chairman of the association. He began his automotive career with Union Carbide Corp. in 1973, and then joined Turtle Wax in 1983, where he was the director of sales and national accounts and managed international business. Six years later, he became vice president of sales and marketing for ARA Automotive Group. In 1991, O’Pry moved to Blue Coral serving as vice president of sales, where he was directly involved with the development and implementation of new programs and p rod ucts. From 1996 to 1999, he worked with Radiator Specialty Co. as its national sales manager, where he was responsible for sales and marketing for the $200mm automotive chemical manufacturer.

Before joining Blue Magic in 2006, O’Pry was director of sales of the automotive p rod ucts division of Georgia-Pacific Corp. Prior to joining Georgia-Pacific, he served as executive vice president for Harold Schnair Sales Co.

O’Pry has been active serving as committee chairs with the Automotive Parts & Accessories Association (APAA) and AAIA. He has served on the AAIA Board of Directors since 2001 and the AAIA Executive Committee since 2002. He graduated from Oklahoma City University in 1973 with a bachelor of arts in business management and marketing. O’Pry resides with his family in Irving, Texas. 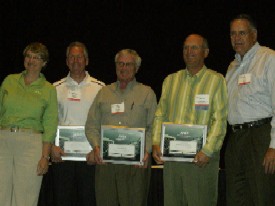 AAIA also elected its new officers and board of directors at its Spring Leadership Days.

AAIA’s elected officers of the Executive Committee are:

Five new individuals were elected to the AAIA Board of Directors, including:

Continuing board members are: