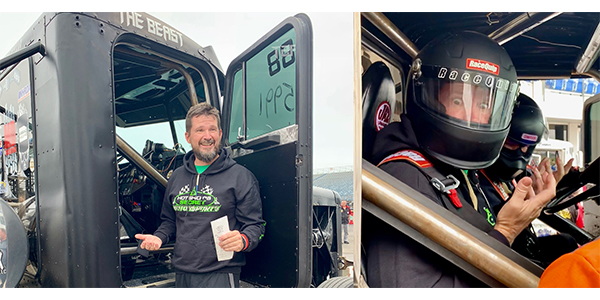 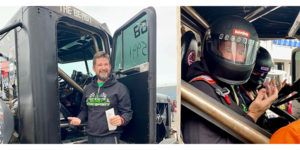 Steve Schwanger gets the surprise of his life with a launch down the track with Mario Monette in his Semi race truck at the NHRDA World Finals.

“My wife Faye entered us in the contest because I compete as a diesel drag racer,” said Steve Schwanger. “What’s funny is that when they attempted to reach us to let us know we had won, Faye wouldn’t take the calls because we thought it was just a joke or a solicitor. Eventually they emailed us with a link to the Facebook page where we were announced as winners that we finally believed this was for real.”

“The trip was beyond what we could have imagined,” continued Schwanger. “I just can’t say enough about how professional and courteous Kyle and T.J. were from Hot Shot’s Secret the entire trip. There were so many special moments about the trip. Some of my favorites were being introduced to drivers I have idolized that got me into racing in the first place and then getting a wrist band that allowed me to stand in the staging lanes between the trucks at the starting line. Then near the end of the event, I was taken by complete surprise and got a chance to ride with Mario Monette in his Hot Rod Semi. It was absolutely a great weekend for both of us.”

Hot Shot’s Secret Director of Marketing, Kyle Fischer, commented “I’ve been in this industry most all of my career and have been involved with many contests like these. Without a doubt, this was the most perfect fit for a winner I’ve seen yet. Steve grew up riding with his dad to the track to watch him drag race his Semi, then grew up to become a Semi drag racer. They were obviously thrilled to be the winners of the Hot Shot’s Secret NHRDA World Finals trip and to be treated to the best of the best in diesel drag racing. And what is icing on the cake, they now are interested in becoming a Hot Shot’s Secret dealer.”

Advertisement
In this article:Hot Shot's Secret, Motorsports, sponsorships
Print
Up Next:

Valvoline Tells World We Are 'The Original'

Carter Enhances Brand With Multi-Faceted Marketing
Connect with us