Hella Celebrates 25th Anniversary in the U.S. And Canada - aftermarketNews 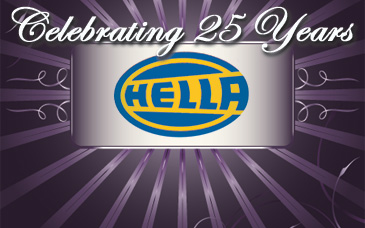 The company was founded in 1983, when Hella KG opened its first American distribution center in Cranford, NJ. Prior to that, Hella had been importing its lighting products and accessories into the U.S. market through Racemark International (Burnt Hills, N.Y.).

In 1991, Hella moved its operations to Peachtree City, Ga., and established headquarters and warehouse facility, which today houses its sales, marketing, engineering, product management and customer service departments. The company has almost 100 sales reps and services more than 1,000 customers.

According to Carl Brown, president of Hella Inc., “We’ve come a long way since our early days as an import automotive distributor for the U.S. market, and have grown dramatically to become a highly-regarded player in the aftermarket as well as a supplier to small and medium OEMs.”

Today, Hella covers the U.S. and Canada region, and is one of Hella KG’s most successful subsidiaries and the largest of its 27 sales organizations, worldwide. Much of Hella’s growth has come from independent activity within its own organization. Over the years, Hella, Inc. has expanded well beyond its automotive aftermarket roots and now serves a much wider range of markets, including agriculture, construction, fleet, heavy-duty, marine, mining, off-highway, and recreational vehicles.