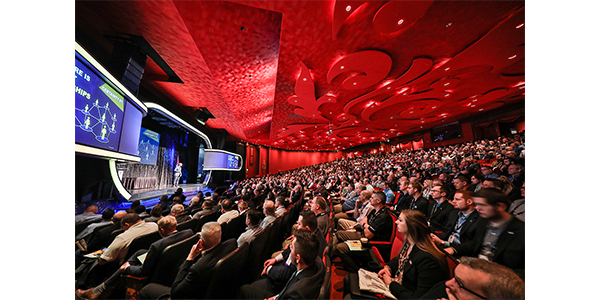 The heavy-duty independent aftermarket conference was held Jan. 28-31 at The Mirage in Las Vegas. More than 2,500 aftermarket industry leaders attended the three-day conference, including more than 1,800 supplier and 680 distributor executives.

Event organizers for the 14th annual Heavy Duty Aftermarket Week (HDAW ’19) have reported record-breaking attendance for both independent distributors and exhibiting suppliers at this year’s event.

The heavy-duty independent aftermarket conference was held Jan. 28-31 at The Mirage in Las Vegas. More than 2,500 aftermarket industry leaders attended the three-day conference, including more than 1,800 supplier and 680 distributor executives. Available booth spaces for exhibitors at the HDAW Product Expo sold out less than a month after the initial space release in September 2018, resulting in a long waiting list. In addition, 1,524 private one-on-one meetings were held during the four-day conference, according to event organizers.

“The buzz during HDAW 2019 was loud throughout the week, and the attendance numbers support[ed] the feeling of excitement felt during the elements of the conference. The independent aftermarket came together for a tremendous week of camaraderie, and it was great to be a part of this record setting year,” said Brett Penzkofer, vice president of North American aftermarket at Meritor and HDAW ‘19 supplier co-chair. “The Product Expo halls were full of activity as suppliers launched new products, technology, and programs into the aftermarket, connecting the independent distributor to their futures.”

“In one week, we learned to embrace technology and the benefits of using it in our businesses, finding and retaining the right people for our organizations and understanding what the independent distributor will need to know to prepare for the increasing technology on the vehicles our customers will be driving,” said Ian Johnston, vice president of sales and marketing at Harman HVS and HDAW ’19 distributor co-chair. “The record number of distributor attendees at HDAW this year shows us that there is an interest in understanding what impact technology will have on their businesses, both on the trucks and in our back offices.”

Nearly 1,200 people attended the Tuesday opening general session to listen to the keynote speaker, futurist Daniel Burrus, who presented “The Anticipatory Organization: A Proven Model to Predict Change & Create Extraordinary Results.” The session demonstrated how to understand and adapt to trends, predicting disruptions before they disrupt and how to pay close attention to emerging opportunities so organizations can quickly capitalize on them.

Afterwards, Burrus was joined on stage by Sam Schmitt, Indy car team owner and driver, to discuss the impact that disruptive technologies in motor vehicles has made in his life and how he has used new technology to overcome his disability to ‘drive a vehicle after a catastrophic test racing accident in 2000.

Midwest Wheel President and CEO John Minor was honored as the 11th recipient of the Heavy Duty Aftermarket Industry Hall of Fame Award. Influential in Minor’s growth, Bob Phillips, CEO of Phillips Industries, was on hand to present the award and to acknowledge Minor for his commitment to the industry. The 2019 Heavy Duty Industry Hall of Fame Award was sponsored by FleetOwner and recognizes a strong leader for their many years in the heavy-duty industry for both their significant contributions and altruistic service to their customers, company, team and the industry.

More than 100 young leaders in the independent heavy-duty aftermarket attended The Leaders of Tomorrow (L.O.T.) reception, held immediately before the opening All-Industry Welcome Reception. Open to those under the age of 45 who registered for HDAW, L.O.T. is an opportunity for attendees to network among peers and enhance their careers.

The 2019 closing All-Industry Reception/CVSN Pinewood Challenge, sponsored by Minimizer, included 28 race participants. The CVSN Pinewood Challenge is the annual racing event for unpowered, unmanned miniature trucks and trailers that mimics pine-car derby races commonly seen during Boy Scouts of America events. Awards for first-, second- and third-place were given to Pinewood Challenge winners. There were also Concours d’Elegance awards for the best looking and best-designed trucks.

Winners of the Pinewood Challenge included:

Winners of the Concours d’Elegance included:

A big announcement during the HDAW ’19 conference was the move of the longstanding Las Vegas conference location to the Gaylord Texan Resort & Convention Center in Grapevine, Texas, for 2020.  HDAW 2020 will be held Jan. 27-30, and the move will accommodate the increased need and industry demand for more exhibit space, the association says. The Product Expo will expand by 80 percent, from 100,000 to 180,000 square feet, and will add more than 250,000 square feet in meeting and event space, thus allowing HDAW to increase opportunities for industry meetings, events, and distributor education offerings.

Advertisement
In this article:HDAW 2019
Print
Up Next:

Association: AAPEX Ranked As One of Top U.S. Trade Shows

ASA Participates in Safety Inspection Study Briefing
Connect with us