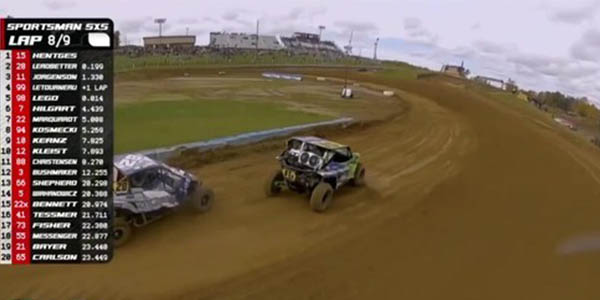 In the final race, on the last lap, two turns from the finish, 15-year-old Gray Leadbetter made history with a bold pass to become youngest driver and first woman to win Sportsman SXS Class in Championship Off-Road Series.

Leadbetter, driving for Greaves Motorsports, is accustomed to making history. Last year, at just 14, she was the only woman and youngest competitor in Americas Rallycross Series. Driving for Dreyer & Reinbold Racing, she went head-to-head against drivers with Indy 500 experience.

Starting 14th in Crandon, the odds of winning were stacked against Leadbetter. She would have to get by 13 drivers, each determined to hold her back, in a race that would last only 10 laps.

Early on, the announcers never even mentioned her. They hadn’t noticed her surgically slicing her way through the field until she had moved all the way up to fifth place.

At the midway point, the field was restarted for the final five-lap sprint to the finish. Leadbetter had made it up to third place before the restart, and jumped into second when the field went green.

She was all over the leader’s back, pressuring at every turn. Moving inside and outside, trying maneuver around, but time after time, he shut her out. Through it all, Leadbetter demonstrated impressive maturity, never giving into the urge to make a desperate all-or-nothing pass. “As much as I wanted the win, I wasn’t about to try and force a pass that could have taken us both out,” said Leadbetter.

With just two turns to go, she dove to the inside and powered past Jonny  Hentges to take the lead. In the post-race interview, Hentges recalled the pass, “I messed up a little bit, and she drove by me like I was standing still!”

It was a fitting end to a year that had handed Leadbetter her share of “racing luck.” Early in the season driving a mini-outlaw, she walked away from a heart-stopping, high-speed wreck that saw her car violently flip four times.

Yet, Leadbetter’s determination never wavered. She proved that sometimes your luck is what you make it. And in her case, that oftentimes means making history, as well.

Advertisement
In this article:Championship Off-Road Series, Gray Leadbetter
Print
Up Next:

Winners Announced In Fourth-Annual Remanufacturing ACE Awards
Connect with us