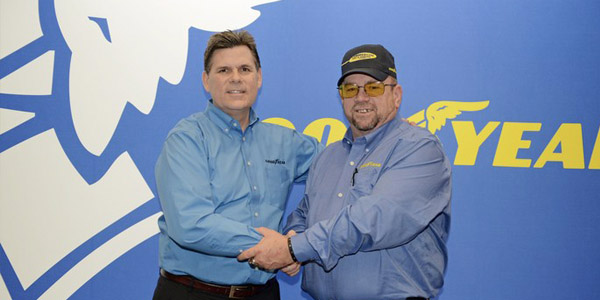 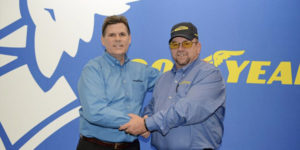 A truck driver who stopped an out-of-control dump truck and then saved the life of an incapacitated driver by performing cardiopulmonary resuscitation (CPR) has been named the 34th Goodyear Highway Hero.

Chosen from three finalists, David Webb of Billings, Montana, this week accepted the 34th Goodyear Highway Hero Award during the Mid-America Trucking Show, which is taking place this week in Louisville, Kentucky.

Webb and his wife, Carol, were driving through Washington State last June when they observed a dump truck in the next lane swerve. Webb pulled up to the dump truck and noticed that its driver was slumped over the steering wheel. As the dump truck slowed, Webb parked his own truck and ran after the still-moving vehicle.

He jumped onto the dump truck’s running board, opened the door, reached inside and applied the brakes, which brought the truck to a stop. As Carol called 911, Webb, working with a bystander, pulled the driver, who was not breathing, out of the truck and was performing CPR on him when help arrived. The driver was hospitalized and survived.

“David took immediate action to save a fellow truck driver and stop an out-of-control truck that could have injured others,” said Gary Medalis, marketing director, Goodyear. “For his quick thinking and courage, we are proud to name him our 34th Goodyear Highway Hero.”

As the Goodyear Highway Hero Award winner, Webb receives a special Highway Hero ring, a $5,000 prize and other items.

Webb and two other truck drivers were selected as finalists for the 34th Goodyear Highway Hero Award. The other finalists were:

Chris Baker, a driver from Chicopee, Massachusetts, was driving down a New Jersey highway when he spotted flickering lights ahead. Pulling closer to investigate, he found a minivan that had flipped over onto its side. Flames erupted from the vehicle’s engine. Grabbing his fire extinguisher, he ran to the van and put out the fire. By then, the van’s passenger had escaped and crawled to safety, but its unconscious driver remained inside, hanging from a seat belt. Working with a bystander, Baker unfastened the driver’s seat belt, grabbed him by the arm, and pulled him away from the van. Baker stayed by his side until rescue crews arrived. The man survived and did not suffer any significant injuries.

Tim Freiburger, a driver from Huntington, Indiana, was driving through Indiana when he saw a car lose control and drive into a creek, where it flipped and came to a stop, upside-down in standing water. Freiburger raced to the car, which contained a mother and her three children. He broke a window and pulled the children out of the car. After carrying them to the creek’s bank, he returned to the car, ripped open its door, and rescued the mother. He stayed with the family until paramedics arrived. The family suffered only minor bruises as a result of the accident.

The Goodyear Highway Hero Award winner was selected by an independent panel consisting of members of the trucking trade press.

“We are proud of all three of our Highway Hero finalists,” said Medalis. “Each is a hero in his own right and is truly worthy of recognition.”

Advertisement
In this article:awards, goodyear, Highway Hero
Print
Up Next: