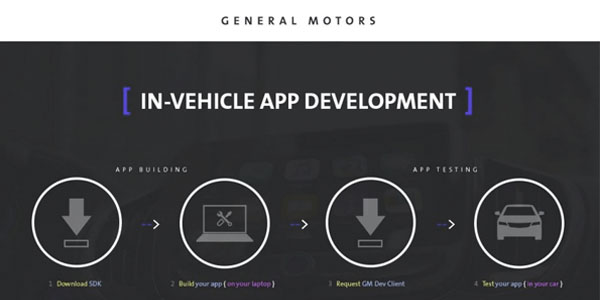 GM says in-vehicle app testing is the next step for app developers that have already created a proof of concept using the company’s next-generation infotainment software development kit. 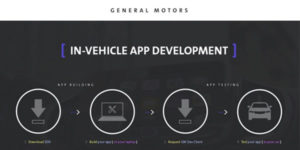 General Motors (GM) has launched GM Dev Client, an app that gives approved developers that have created in-vehicle applications the ability to test them in a real GM vehicle. In-vehicle app testing is the next step for app developers that have already created a proof of concept using GM’s next-generation infotainment software development kit (NGI SDK).

After building an application’s proof of concept with the NGI SDK, the next development step is to conduct real-world testing using a GM vehicle’s infotainment system. GM Dev Client allows partners and developers the ability to test their apps in a GM vehicle once they’ve obtained approval from GM.

In January 2017, GM released the NGI SDK, which mimics real vehicle data and enables developers outside of GM to build apps without making frequent trips to Detroit to conduct testing on infotainment modules. With GM Dev Client, those apps now can be tested on a real GM vehicle anywhere in the U.S.

“Sharing more emulated data points through the SDK than any other automaker was the first step in opening the door for developers,” said Kent Helfrich, executive director of Connected Ecosystem Integration, General Motors. “After such strong adoption of the SDK, we wanted to enable developers to take the next step and allow real-world testing in our vehicles.”

By the end of 2017, GM aims for the NGI SDK to offer templated framework for developers such as a media player layout or a point of interest layout.

Advertisement
In this article:developers, GM, in-vehicle app, Testing
Print
Up Next: