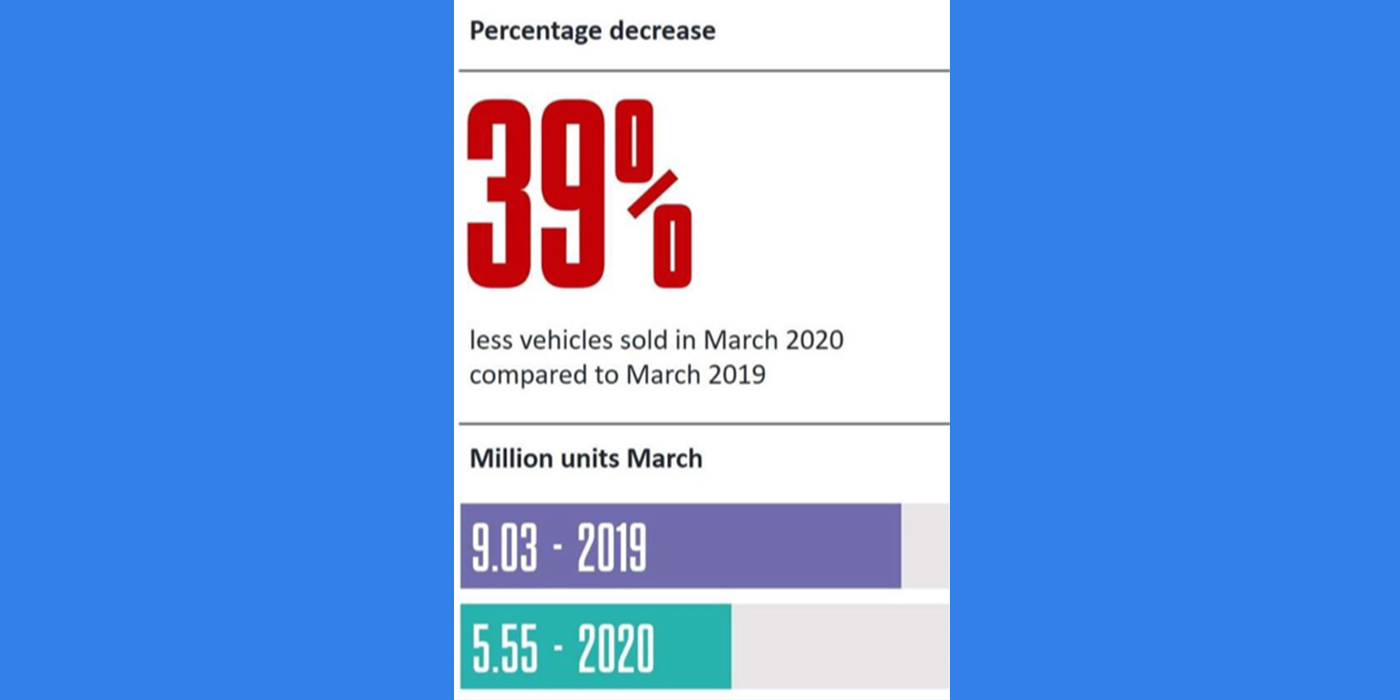 Overall, the total for the first quarter of 2020 already highlights a reduction of 26%, decreasing to 17.42 million units.

The outbreak of COVID-19 has already impacted the automotive industry significantly, according to JATO Dynamics, a leading provider of global automotive data and insight. Global vehicle sales totaled 5.55 million units in March 2020, down by 39% from March 2019.

This represents the largest year-on-year monthly decrease since 1980, when JATO Dynamics started to collect data – even surpassing the global financial crisis in November 2008, which saw a 25% decline in sales.

With the pandemic spreading across the globe, strict lockdowns in key markets, combined with consumer panic and economic uncertainty, have all contributed to the huge decrease in sales last month.

“This downward trend is not simply due to the restrictions of free movement. The industry is being impacted largely by the uncertainty for the future, and this issue started to arise even before the pandemic took hold,” said Felipe Munoz, JATO’s global analyst. “We have to remember that the industry was already operating in a challenging environment, especially toward the end of last year. The trade wars, lower economic growth and tougher emissions regulations came long before the COVID-19 crisis. And unlike previous recessions, we’re not just dealing with people’s fears or purchase delays. This time we have to consider that consumers are simply unable to leave their homes.”

Overall, the total for the first quarter of 2020 already highlights a reduction of 26% Q1 2019 with sales decreasing to 17.42 million units.

China, Europe, and the U.S. all posted double-digit declines in March. However, Europe was hit the hardest, with the lowest number of sales for March in 38 years. The passenger cars registrations for Europe-27 comprised of 848,800 units, down by 52% compared to March 2019. This result follows declines in January and February, taking the quarterly volume down to 3.04 million units.

Registrations fell in all 27 markets, but with varying severity. In Finland and Lithuania volumes fluctuated only marginally. In Finland’s case, isolation was advised by the government but was not mandatory, with consumers in Lithuania still able to purchase new cars remotely, with delivery taking between 3 to 7 working days. Swedish car registrations fell by 9%, the third smallest decline after Finland and Lithuania, this is also due to the population not being forced to stay in their homes.

In contrast, markets were significantly hit in Italy, France, Spain, Austria, Ireland, Slovenia, Greece and Portugal, where the combined volume fell from 634,600 units in March 2019 to 161,800 units last month. The impact of COVID-19 was at its peak in March for these countries and consequently the majority imposed strict lockdown policies on their populations.

As expected, all segments across Europe were impacted negatively by mandatory lockdowns. Those most affected were city-cars, MPVs and subcompacts. This is in part due to the collapse of the Italian and French markets, on which small cars are heavily reliant for sales – in 2019, 38% of A and B segment registrations in Europe occurred in Italy and France. The lowest decrease in registrations was recorded by Midsize cars (D- Segment) and this can be explained by positive results reported by Tesla Model 3, which was Europe’s second best-selling car in March.

Registrations of SUVs fell by 48% to 338,300 units while increasing their market share to almost 40%. MG (owned by the Chinese SAIC) was the only group to post an increase in registrations, with its volume jumping from 1,327 to 2,592 units. Some models performed better than others. For example, volume only fell by 5% for the Volvo XC40, which became the top-selling premium SUV in March, and the Range Rover Evoque registered 5,700 units, down by 3%. Whereas Audi and Mercedes increased the registrations of their E-Tron and GLE by 86% and 213% respectively.

However, details by powertrain highlights that only pure electric cars (BEV) and plug-in hybrids (PHEV) drove this growth, as hybrids posted a decline of 11%. In fact, the BEV figures were only 10,000 units less than the hybrids. The Volkswagen e-Golf, Audi E-Tron, and Volkswagen e-Up, posted impressive results for BEVs in March. The new arrivals like the Mini electric, Peugeot 208-e, MG ZS and others accounted for 17% of all BEV registrations.

Overall, the continent was the second region to be severely affected by the virus, following China and Korea on the timeline. The results posted for Europe in March, were similar to those posted in February for China. However, unlike China, the recovery for Europe is likely to be U-shaped rather than V-shaped.

Turbulence Ahead for the US

Sales in the U.S. totaled 1 million units, down by 38% from March 2019 – a smaller decrease than both China and Europe. As COVID-19 didn’t spread to the U.S. as early as these markets, quarantine only came into force in specific parts of the country during March. Munoz explained: “The USA vehicle market’s growth slowed last year, after many years of strong growth. At the beginning of the year we expected the market to face a slow stagnation, however this is now more likely to decline at a faster pace due to the impact of the global pandemic.”

India among the hardest hit by disruption

Having been in lockdown since mid-March, the world’s fifth-largest vehicle market has been hit significantly with the market facing a complex environment even prior to COVID-19 due to the new BS-VI regulation, which was set to come into force from April 1, 2020. The regulation has already had an impact on production, as their transition directly from BS4 to BS6, in line with the Supreme Court’s deadline, meant that BS4 models could no longer be registered and many manufacturers were left with unsold factory and dealer stock.

All OEMs discontinued smaller diesel engines, which was particularly difficult for the industry as high levels of sales came from diesel – Maruti Suzuki shifted to petrol and CNG when 20% of its sales previously came from diesel engines. Consumer demand also was impacted as a result, as OEMs introduced new and improved models, there was a general perception among consumers that BS6 cars would be too expensive, deterring potential buyers. As the April 1 deadline approached, many customers were holding back from purchasing cars in anticipation of better deals. However, before they could look to buy, COVID-19 struck the industry and disabled purchasing power.

China on the Rise

For China, the landscape has improved since February, when sales shrank by 79% year-on-year. Along with resumption of work, in March there have been significant improvements in both production and sales: according to the statistic released by the China Association of Automobile Manufacturers, the production resumed to 75% of the 2019 yearly average; due to the fact that the epidemic hasn’t ended completely, some market demands have still been repressed.

However, there has been a quick recovery between February and March – the insurance volume of passenger vehicles reached 1.08m units in March, which represented a growth of 427%. Bo Yu, country manager for Greater China at JATO, explained, “The insurance volumes indicate an increase in real consumption and is not impacted by the high dealer inventory.”

Meanwhile, in March the decline has narrowed to just 30% from a year earlier, compared to the decline of 78% seen in February year-on-year. Further performance improvement is expected in April with the continuous decline of the epidemic as well as a series of central and local government policies shoring up the car market.

Yu commented, “We are positive about the state of the automotive industry in China. Sales figures are on the rise and businesses are returning to normal as remote working is being lifted. COVID-19 will have a lasting impact on the working world and how people across the globe choose to travel. As social distancing continues and consumers start to place greater emphasis on personal space, private car sales are likely to benefit. We continue to closely monitor the environment but early indications from the Chinese market could signal a potential resurgence for OEMs as we move into the post-COVID-19 era.”

Advertisement
In this article:Global Vehicle Sales, JATO Dynamics
Print
Up Next: