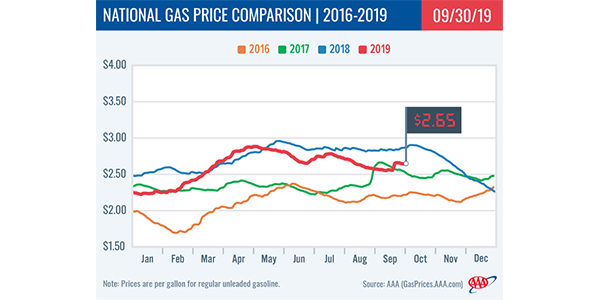 Two weeks after attacks on major Saudi Arabian oil facilities, the majority of Americans are starting to see signs of gas prices trending cheaper. While the national average may have only decreased by a penny on the week, 10 states saw pump prices decline by a nickel or more.

“Crude oil prices have dropped close to where they were right before the drone attacks on the Saudi oil facilities,” said Jeanette Casselano, AAA spokesperson. “This is helping to push gas prices cheaper in most of the country. Americans can expect this trend to continue, except for those filling-up on the West Coast, where refinery disruptions are causing spikes at the pump.”

On the week, all West Coast region states saw prices increase with California (+28 cents) seeing the largest spike, which drives the state average to $4.02 and is likely to push more expensive this week.

Today’s national gas price average of $2.65, which is the same price as last week, and is seven cents more expensive than last month, but 22-cents cheaper than a year ago.

Advertisement
In this article:AAA
Print
Up Next:

Insights From The NPD Group: Tire Sales Show Growing Desire For Larger Vehicles Over Sedans In US