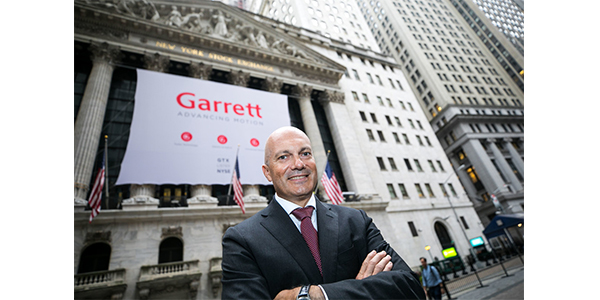 Garrett CEO and President Olivier Rabiller led Garrett’s executive leadership team in marking a new era in the more than 60-year history of the company by ringing the opening bell above the trading floor at the New York Stock Exchange.

President and CEO Olivier Rabiller says he is ready to lead Garrett into a new era of advancing motion, celebrating its first day of trading as an independent company. The new company’s stock will be traded under the symbol “GTX.”

“This is a memorable milestone for a company that already celebrates more than six decades as an automotive technology pioneer, inventor and innovator,” Rabiller said. “We have a robust and talented organization of world-class people, and we have established a strong position for providing differentiated technologies that are in demand.

“In leveraging our rich heritage as Honeywell Transportation Systems, we have evolved Garrett into a new dynamic and forward-thinking company. The Garrett name has been synonymous with advancing motion by revolutionizing turbocharger technology that has become foundational to modern internal combustion engines. Now, as an independent company, Garrett will vigorously pursue opportunities to provide electric boosting and automotive software solutions addressing global macro issues, including more stringent fuel economy regulations and increased connectivity, which are heavily driving future vehicle development.”

Garrett has more than 7,500 employees including some 1,200 engineers contributing to 1,400 issued or pending patents. In 2017, the company’s revenues were approximately $3.1 billion.

Advertisement
In this article:Garrett, Spinoff
Print
Up Next: