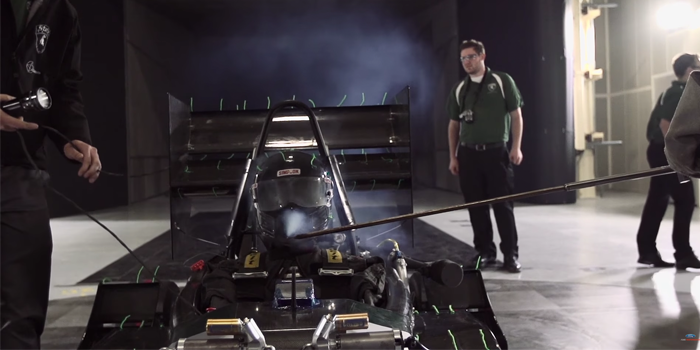 Ford has been working with the next generation of dedicated student racers for more than a decade, offering the time and expertise of its engineers and allowing the teams to put their cars to the test in its tunnel facilities in Allen Park, Michigan.

For months, college engineering students with a passion for motorsports have been breathing, eating and living race car aerodynamics – tuning, testing and tweaking their cars to ensure their team has the lightest, fastest machine on the track. 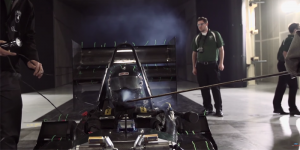 Since 2004, hundreds of students on Ford-sponsored teams in Formula SAE, Solar Car, SAE Super mileage and other series work to make their cars as aerodynamically efficient as possible. They aim for perfection – striving to be the fastest and the best. Along their journey, Ford engineers help them refine their craft in one of the company’s world-class wind tunnels. The company has released a video about their experiences.

Ford has been working with the next generation of dedicated student racers for more than a decade, offering the time and expertise of its engineers and allowing the teams to put their cars to the test in its tunnel facilities in Allen Park, Michigan.

Ford’s wind tunnel is particularly sophisticated, providing both aerodynamic and aeroacoustic testing in a wide variety of environmental conditions for the company’s diverse lineup of both current and future vehicles. Ultimately, the facility allows Ford to bring higher-quality products to its customers.

“For Ford, this is great community involvement,” said Erik Stancato, a Ford vehicle architecture-vehicle integration engineer. Stancato formerly captained his Formula SAE team at the University of Michigan-Dearborn. “We have the testing facilities, we can answer the technical questions and we can offer occasional manufacturing support.”

Steve Wegryn, Ford supervisor of wind tunnel operations, says the facility lets the students come full-circle on their designs. “By simulating race speeds, they can validate their projections and estimations on downforce and drag with hard data – enabling them to tweak their design for optimal performance”.

Justin Rujan, the lead aerodynamics engineer for the Formula SAE team at University of Michigan-Dearborn, agrees. Rujan recently spent a day in Ford’s wind tunnel. “In a book, you can learn the basics and lay the groundwork to make design choices,” he said. “But until you can actually apply that, and know you’re doing it the right way, it’s hard to make those choices.”

In May 2015, the U-M Dearborn team placed 8th out of 120 college teams at the Michigan International Speedway, competing against teams from around the world.

However, the results can be seen long before the race begins. Tristan MacKethan, a junior and co-aerodynamic lead for Formula SAE’s MRacing at the University of Michigan-Ann Arbor, says his team was able to optimize downforce by 24 percent as a result of an eight-hour session in the tunnel. Downforce improves traction and cornering abilities, both important factors in racing. Ultimately, this should lead to faster lap times on the track.

MacKethan, interning at Ford this summer in the autonomous vehicle platform group, is part of a growing community of recruits from the program.

Competing on a student team offers benefits even after college, notes Joe Hendrickson, who joined Ford as a systems engineer soon after graduating from the University of Michigan-Ann Arbor in 2015. He served as captain of his Formula SAE team his senior year.

“With this program, you’re using your degree before you even get out of school,” he said. “You’re used to changing things around, collaborating, trying new things. That’s helped me immensely in my position at Ford.”