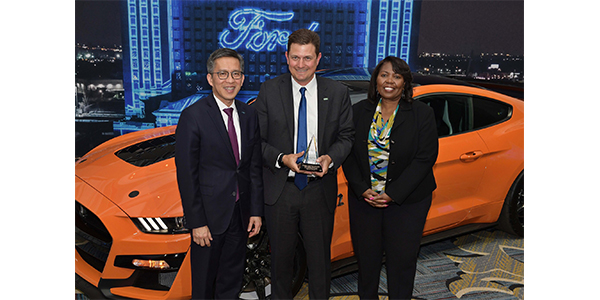 “Ford’s longstanding continued support of MANN+HUMMEL as an ABF supplier is a position all of our associates deeply value. Achieving awards both in recognition of our Aligned Business Framework contributions globally as well as our Thailand team’s hard work is an honor. We believe in Ford’s ‘Smart Vehicles in a Smart World’ direction and are excited and grateful to be able to grow with and support them,” said Kurk Wilks, president and general manager OEM at MANN+HUMMEL.

“Ford’s annual World Excellence Awards recognize our top-performing suppliers for their contributions to our success,” said Thai-Tang. “Suppliers like MANN+HUMMEL play an instrumental role in helping us achieve our vision of being the most trusted mobility company.”

Honorees were recognized for achieving the highest levels of global excellence in 10 categories, including:

• Aligned business framework for suppliers that most exemplify the framework’s principles, with an emphasis on quality, value and innovation;

• Diverse supplier of the year and supplier diversity development corporation of the year to honor suppliers that excel in integrating diversity into their organization and business process; and

Advertisement
In this article:Ford, MANN+HUMMEL
Print
Up Next: