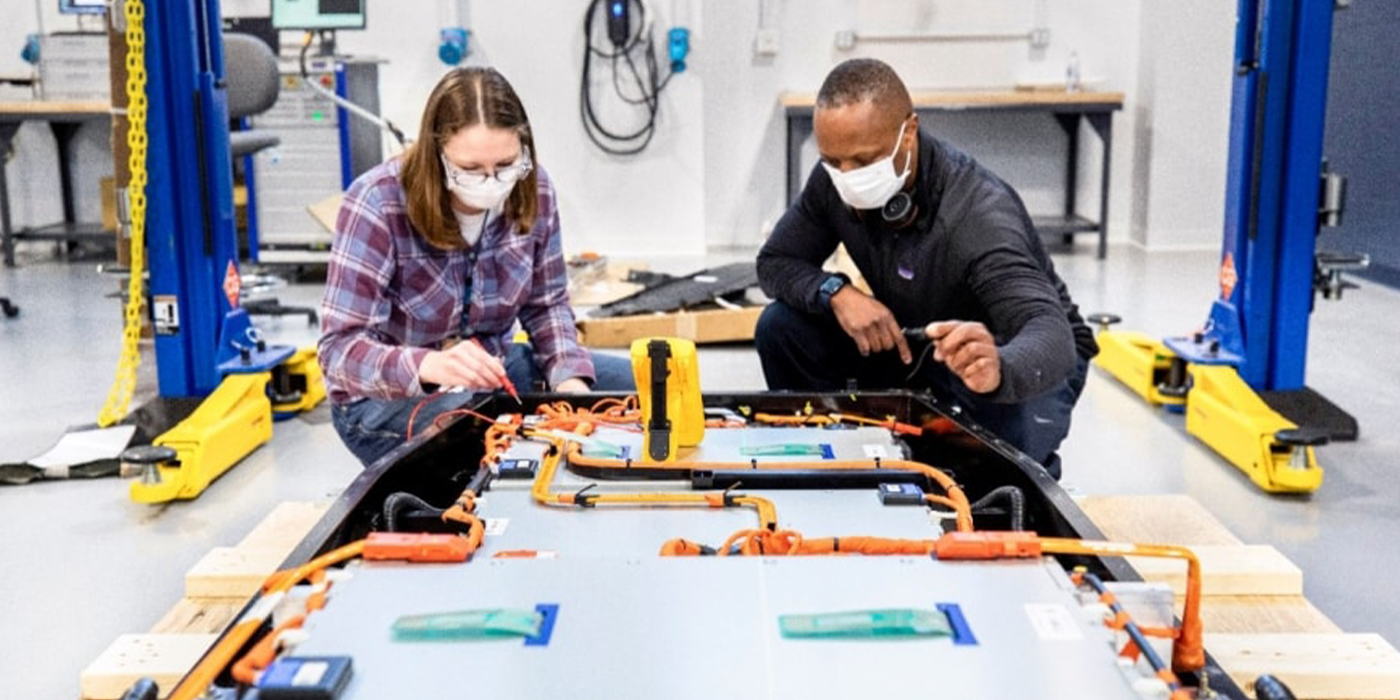 The Ford Ion Park team also is exploring better integration and innovation opportunities across all aspects of the value chain – from mines to recycling – working with all teams within Ford, including experts at Ford’s new Battery Benchmarking and Test Laboratory, Ford Customer Service Division, plus key suppliers and partners.

“We are creating new tools and solutions we need for a carbon-free, affordable and better future,” Thai-Tang said. “We are modernizing Ford’s battery development and manufacturing capabilities so we can better control costs and production variables in-house and scale production around the world with speed and quality.”

The Ford Ion Park team already is underway. In addition, a $185 million collaborative learning lab in Southeast Michigan that is dedicated to developing, testing and building vehicle battery cells and cell arrays opens late next year.

This world-class 200,000-square-foot learning lab will include pilot-scale equipment for electrode, cell and array design and manufacturing and will use state-of-the-art technology to pilot new manufacturing techniques that will allow Ford to quickly scale breakthrough battery cell designs with novel materials once the company vertically integrates battery cells and batteries.

Anand Sankaran will lead the Ford Ion Park team as its new director. A 30-year veteran of Ford, Sankaran brings to the new position decades of battery and electrification expertise – including his current role as the company’s director of Electrified Systems Engineering, as a 1999 Henry Ford Technology Award winner for his electrification work at the Ford Research Lab and a product development leader who applied his research and technical innovations on key production vehicles, including the award-winning original Escape Hybrid, 2021 Mustang Mach-E and 2022 F-150 Hybrid.

Sankaran also holds 32 U.S. patents in automotive power electronics and hybrid vehicle technologies and is a fellow of the Institute of Electrical and Electronics Engineers.

“Ford’s modern EV journey started with Escape Hybrid in 2004, the world’s first hybrid SUV, and it continues today – all driven by the inspiration to deliver no-compromise vehicles for a better world,” he said.

The Ford Ion Park team will ensure batteries are optimized for its diverse customers – from daily commuters to performance enthusiasts to commercial vehicle fleet operators.

The team will apply customer insights to optimize battery technologies that deliver the performance and capability truck, utility, commercial vehicle and fleet owners value most. That means creating distinct batteries and technologies to deliver meaningful towing and off-road capability for truck customers as well as stop-and-go driving efficiency for fleet operators in cities worldwide.

“While some automakers have placed their bets, we are going to use this lab with the help of partners and suppliers to fine-tune our batteries to our vehicles and customer needs – exploring next-generation lithium ion solutions, including solid-state batteries,” Sankaran said.

Ford this year announced its commitment to invest at least $22 billion through 2025 to deliver connected, electrified vehicles, building on its areas of strength, starting with EV versions of its most popular nameplates.

In Europe, Ford is moving to an all-electric lineup by 2030, with its commercial vehicle range 100 percent zero-emissions capable – all-electric or plug-in hybrid – by 2024. Ford also is investing $1 billion in a new electric vehicle manufacturing center in Cologne to build a high-volume all-electric passenger vehicle for European customers starting in 2023.

In China, Ford is preparing to produce the Mustang Mach-E for local customers later this year, and recently announced it is establishing a BEV division with a direct sales model and network that will reach 20 major cities across China this year. In addition, Ford has partnered with China’s State Grid and NIO to offer EV customers access to more than 300,000 public charging stations, of which 160,000 are fast-charging, in more than 340 cities across the country.

Ford has been actively involved in battery research and electric vehicles, starting with Henry Ford and Thomas Edison. To date, the company has secured more than 2,500 U.S. patents in electrification technologies, with another 4,300 patents pending.

Since 2004, Ford has sold more than 1 million hybrids, plug-in hybrids and all-electric vehicles and integrated four generations of batteries into its vehicles. By year-end, the company will be manufacturing electrified vehicles and supporting technologies at more than 15 powertrain and vehicle assembly plants globally.

Ford has assembled hybrid battery packs and electric motors in Michigan since 2012, after making the state its center of excellence for vehicle electrification in 2010.

That same year, Ford invested $135 million to design, engineer and produce these components for hybrids. It included a combined 170 jobs at the Rawsonville plant to assemble batteries and VanDyke Transmission plant to assemble e-motors, plus hiring more than 50 electric vehicle engineers.

Advertisement
In this article:Batteries, EVs, Ford, R&D
Print
Up Next: