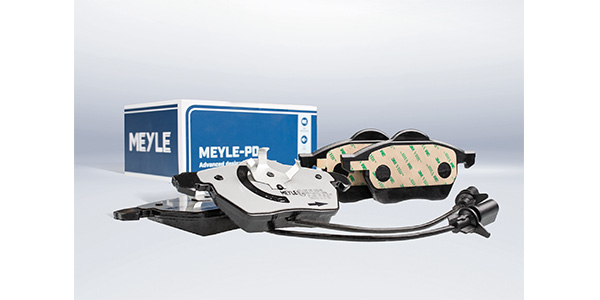 New friction material has been utilized to minimize noise during sporty driving and ensure longer durability.

Generally speaking: The more sporty the pad is, the more likely it is to squeak. With the “next generation” MEYLE-PD brake pads, the Hamburg-based manufacturer is now going one step further and reducing the noise emission of its performance-oriented brake pads to a minimum. In total, 350 MEYLE-PD brake pads for passenger cars have been technically enhanced compared to the previous version.

Oscillations and vibrations of the surrounding components and brake discs can lead to braking noises and squeaking brakes. In particular, performance-oriented brake pads tend to generate noise or squeak due to their hardness. This type of noise must be compensated by the brake pad as a direct connection to the brake disc. The Hamburg-based manufacturer MEYLE has therefore devoted more time to this topic and invested a great deal of time in the development of performance-oriented and at the same time low-noise brake pads.

The brake pads, which are already individually adapted to the respective vehicle classes, have been refined again in numerous tests and driving trials. “There are many factors that influence the formation of unpleasant noises. We can directly influence a fraction of this, which is why we have focused on these starting points,” said Stefan Bachmann, head of the MEYLE Brake product team. “My team has invested a lot of time and effort to offer the ambitious driver brake pads for performance-oriented, sporty driving that work almost silently at the same time – the best possible combination.”

In addition to the further developed friction material, the design of the brake pad surface also has been adapted, MEYLE says. Chamfers and slots of the friction pad are optimally aligned to the different vehicles. In addition, the new MEYLE‑PD brake pads with individual so-called shims, provide the best possible vibration isolation and thus further minimize noise generation, the company says.

MEYLE says it takes its responsibility as a manufacturer very seriously: All MEYLE-PD brake pads are not only tested and certified according to ECE R 90 quality standards, but even exceed these within the scope of legal approval. Even the re-designed MEYLE PD brake pads have to withstand a multitude of braking operations in everyday and extreme situations without any adverse effects, according to MEYLE. In addition, MEYLE PD pads were tested by an external, independent institute in comparison to competitor products and their low-noise performance and durability were confirmed.

The “next generation” MEYLE-PD brake pads were presented at Automechanika 2018 and are available now.

Advertisement
In this article:meyle
Print
Up Next: