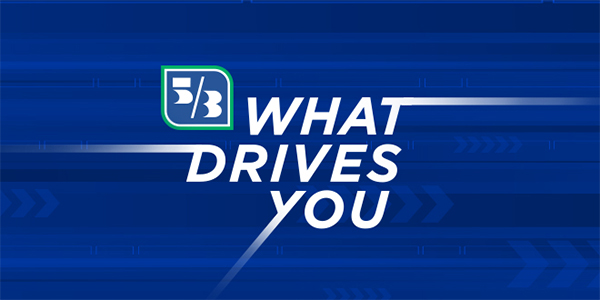 The grand prize includes logo placement on the No. 17 Fifth Third Ford Mustang.

Fifth Third Bank is offering business owners a chance to have their company’s logo featured on a NASCAR vehicle through a contest that kicks off today.

The winner of the Fifth Third Bank “What Drives You” Contest, which runs through April 26, will see their logo on Ricky Stenhouse Jr.’s No. 17 Fifth Third Ford Mustang at an upcoming race. Customers and owners can nominate businesses online in recognition of the way they push for excellence. The public will pick a winner from the top three nominees in early May.

One lucky business will be selected to have its company logo featured on the trunk of the Fifth Third Ford during the Quaker State 400 presented by Walmart at the Kentucky Speedway on July 13. The race is part of the 2019 Monster Energy NASCAR Cup Series.

The contest also will celebrate nonprofit organizations by giving them a chance to have their name featured above the passenger-side door of the same car.

“We understand how businesses in our communities make big contributions,” said Kala Gibson, head of business banking for Fifth Third Bank. “At Fifth Third, we want to celebrate this hard work, energy and passion. We’re excited to showcase a business, giving their name and logo exposure to millions of fans at the race and watching from home.”

The business winner and a guest also will receive a VIP experience at the race, including airfare, hotel accommodations, pit box seating and a chance to meet Stenhouse. The bank will make a $1,000 charitable donation to the winning nonprofit.

The 2018 contest winner, Doug Herbert, runs B.R.A.K.E.S. (Be Responsible And Keep Everyone Safe), a GuideStar platinum-rated 501(c)(3) nonprofit dedicated to preventing injuries and saving lives by training teens and their parents to be safer and more responsible behind the wheel. Herbert, a Top Fuel drag racing champion, founded the organization in 2008 after his two sons died in a car crash. Since then, the charity has trained more than 30,000 teens and their parents at dozens of schools across the country.

“I loved seeing our logo go around the track bringing awareness to saving teens’ lives across America. It was so cool,” Herbert said of the win. “Car crashes are the No. 1 cause of death among teens, but every bit of exposure we get supports our mission to fight that epidemic and save more lives. We’re truly grateful for this recognition and for Fifth Third’s support of our small business.”

Herbert received the decklid with his logo from the No. 17 Ford Mustang. The lid now hangs in the conference room of the B.R.A.K.E.S. office.

Companies and nonprofits with fewer than 100 employees in the bank’s 10-state footprint are eligible to enter the contest categories. The nomination process asks two questions: Tell us about this business. What drives you to succeed? Nominations may be submitted through April 26.

Public voting will take place May 6-10; the winner will be announced in late May.

To submit a nomination and for official rules and details, visit the contest page at 53.com/racing. No purchase necessary.