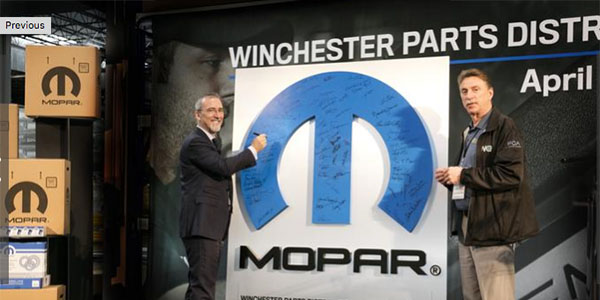 The 400,000-plus square-foot facility represents a $12.2 million investment by FCA US and more than 70 jobs over two shifts. It is the first of two new Mopar PDCs scheduled to open in the U.S. this year. 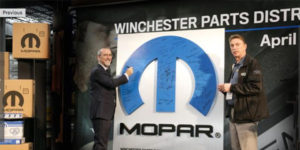 FCA US celebrated the official opening today of a new Mopar parts distribution center (PDC) in Winchester, Virginia. The 400,000-plus square-foot facility represents a $12.2 million investment by FCA US and more than 70 jobs over two shifts. It also is the first of two new Mopar PDCs scheduled to open in the U.S. this year.

“We are celebrating our 80th anniversary in 2017, and throughout the years customer satisfaction has been and continues to be the Mopar brand’s No. 1 priority,” said Gorlier. “This new Parts Distribution Center builds upon our mission, allowing us to more quickly and efficiently serve our dealers and customers, delivering the parts they need when they need them. This is our 22nd PDC in North America and we’ll continue to expand our distribution network as the parts and accessories business keeps growing.”

“Today’s opening adds more than 70 jobs to the Virginia economy and makes the Mopar brand’s delivery of parts to dealers and consumers more efficient. FCA continues to grow, which is a constant reminder that the auto loans were a great investment,” said Jewell.

A framed Congressional Record statement issued by Congresswoman Comstock was presented in honor of the official opening of the PDC. A special Mopar logo, featuring a commemorative plaque and signed by all event attendees, also was presented to Winchester PDC employees and management during the ceremony.

The new facility will handle more than 50,000 total part numbers distributed to more than 200 FCA US dealerships, located primarily in the Mid-Atlantic region. It will ship approximately 9.2 million pieces annually.

FCA US invested $12.2 million in equipment for the Winchester facility. In addition to the more than 70 jobs created, FCA US also is utilizing local resources for assistance in areas such as janitorial services, facilities management and exterior building maintenance.

The Winchester PDC was launched under FCA World Class Logistics methodology, which establishes a synchronized supply chain that progressively eliminates waste through the contribution of all employees and the rigorous use of methods and standards that promote an approach of continuous improvement.

The facility will be LEED (Leadership in Energy and Environmental Design) certified. LEED, administered by the United States Green Building Council, is a comprehensive system to define, measure and validate green buildings.

Certification in the national recognition program is based on strict standards in five key areas: site planning, water management, energy, material use and indoor environmental quality. As part of the LEED initiative, the PDC design incorporates more than 80 skylights, filtering in natural light to the workplace.

In addition to the Winchester PDC, FCA US also has announced a $10.4 million investment in a new Mopar PDC located in Romulus, Michigan. That facility will encompass 500,000 square feet and more than 100 workers. Construction is currently in progress on the Metro Detroit facility, with a projected opening in fourth quarter 2017.

Advertisement
In this article:Distribution, Expansion, FCA US, mopar
Print
Up Next: