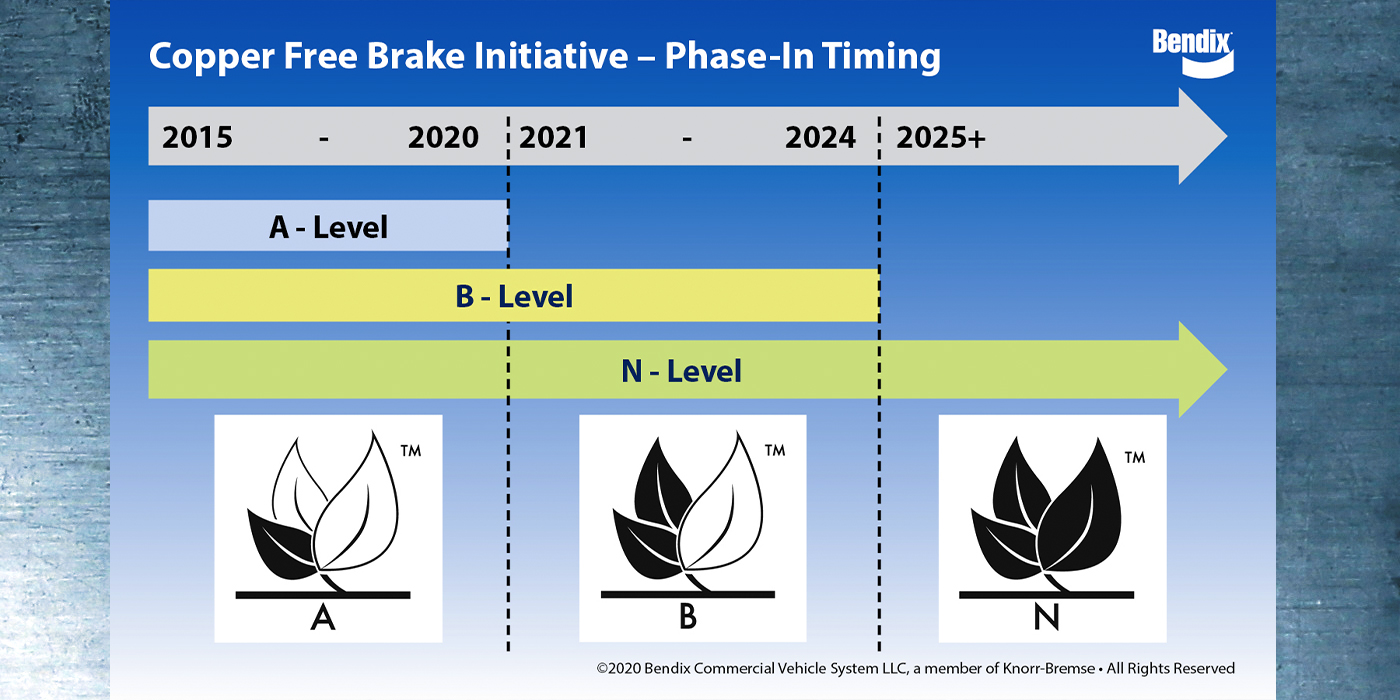 With the first phase of the Environmental Protection Agency’s (EPA) Copper-Free Brake Initiative coming to a close at the end of the year, Bendix Commercial Vehicle Systems LLC reminds fleets and owner-operators to make sure they’re keeping up with the necessary changes in aftermarket air disc brake (ADB) friction formulation. Bendix was already offering compliant friction years ahead of the 2021 deadline, but some older, noncompliant pads will no longer be available.

“It’s important that fleets, distributors, and everyone who does brake pad changes is aware of what’s going on with various Bendix replacement pads and labeling,” said Keith McComsey, Bendix director, Air Disc Brake & Systems. “And with the significant increase in ADB adoption over the past decade, there’s a particular interest in ADB pad changes.”

Almost six years ago, in January 2015, organizations within the automotive and commercial vehicle industries – including trucking – signed onto the Copper-Free Brake Initiative, along with the EPA and the Environmental Council of the States. This action was taken because copper from stormwater runoff can be harmful to the environment, affecting plants and animals – and when used in brake pads, it makes its way into the air and water through the fine dust released from friction during braking. (Copper is not the only material covered: The agreement also reduces the use of other substances in brake pads, including mercury, lead, asbestos, chromium-six salts, and cadmium.)

While those dust particles may not seem like a big deal, they add up: In 2010, according to EPA estimates, vehicular braking in California alone released 1.3 million pounds of copper into the environment. That year, both California and Washington passed laws reducing the amount of copper permitted in brake pads – a move that Bendix commended for its positive environmental impact. Even then, most Bendix brake friction was already compliant with the requirements that wouldn’t take effect for several years.

The Copper-Free Brake Initiative agreement outlined changes to come in the composition of brake friction nationwide: A-Level compliance started Jan. 1, 2015; the legal maximum amount of cadmium in a brake pad formula could be no more than 0.01% (one-hundredth of 1%) of its weight. For asbestos, chromium-six salts, lead, and mercury, the limit was 0.10% – one-tenth of 1%. Copper limits were not specified as part of A-Level compliance.

B-Level compliance (or the second phase of the agreement) takes effect Jan. 1, 2021, and limits the amount of copper to no more than 5% by weight. Other material limits remain unchanged. In January 2025, copper’s limit will drop to 0.5% – one-half of 1% – by weight for N-Level compliance. The agreement also commits participants to taking steps to educate the automotive and trucking industries on the changes, and provides guidelines for marking and labeling friction material packaging and products.

“Even though many Bendix friction materials have been compliant with the 2021 standards for a long time, some older aftermarket ADB pads will be phasing out of compliance at the end of the year,” McComsey said. “For customers currently using these, we’ve been including postcards with the replacement kits letting them know about the change and pointing them to the compliant friction.”

The A-Level-compliant frictions, which include both the Bendix BX275 OE-level friction and the aftermarket BA235, will become obsolete. The suitable B-Level copper-compliant replacements are the Bendix BX276 and BX283 pads, which are OE-level pads already available in the North American market. Both will remain compliant through 2024, while providing longer friction life and meeting FMVSS-121 stopping distance and park hold requirements. Bendix will also launch the BA236™ pad in 2021, an aftermarket friction that will be B-Level copper-compliant through 2024.

“When Phase 3 of the initiative rolls around on Jan. 1, 2025, Bendix will be ready for that too,” McComsey said. “We’re already engineering copper-compliant ADB friction for the most stringent level, with plans for production to begin well in advance of the deadline.”

Advertisement
In this article:Bendix, brake products, copper free, EPA
Print
Up Next:

Shell Starship 2.0 To Embark On A Coast-To-Coast Drive In May