ELGIN, Ill. — In 1919, the world’s best-selling automobile was the Ford Model T and the independent aftermarket was still in its formative stages. Yet, Czechoslovakian immigrant Martin Skok saw opportunity in the vehicle parts industry. In May of that year, Skok founded the company that would become Elgin Industries, which, 90 years later, continues to prove that a family-owned manufacturing business can thrive in the automotive and commercial vehicle markets. 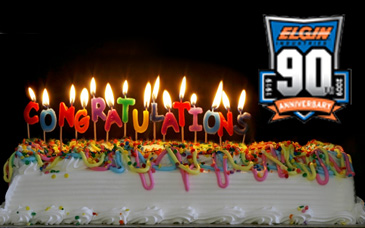 Elgin Industries, now operated by Skok’s grandchildren, is celebrating its 90th Anniversary with a nearly yearlong series of activities and product announcements as well as an extensive branding campaign in support of the company’s original equipment and aftermarket operations.

“Ninety years is a very significant milestone for any family-owned business, but especially so in the automotive and heavy-duty markets because it means you were a pioneer in one of the world’s largest and most important industries,” said Elgin President Bill Skok. “Our 90th Anniversary celebration will honor not only the vision and hard work of my grandfather and my father, but also the past and future success of our customers.”

One of the most significant recent additions to the company’s product line was the Eaton brand of diesel engine components, of which Elgin is now the exclusive aftermarket source.

Elgin’s performance engine parts business continues to grow under the widely recognized Elgin PRO-STOCK brand, and several important additions to the performance business are planned for the company’s 90th Anniversary year, according to Skok.

“We are very entrepreneurial in our approach to the performance marketplace,” he said. “We are dramatically expanding our product offering, refining our cataloging and packaging and updating our brand structure to enable customers of all sizes to grow their businesses by relying on Elgin.”