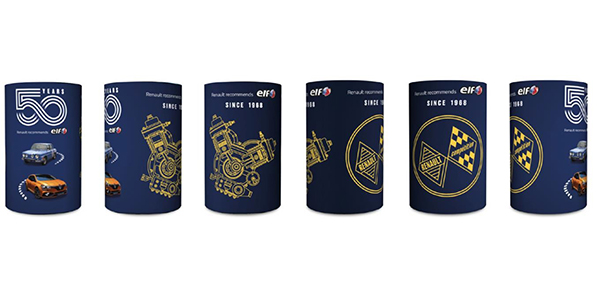 The new ELF EVOLUTION RN-TECH line of co-branded lubricants being launched with limited-edition packaging to celebrate the partnership’s 50th anniversary.

The ELF brand has been sharing its expertise in lubricants and its spirit of innovation with French carmaker Renault for half a century. The values that underpin this long-standing partnership recently inspired the new ELF EVOLUTION RN-TECH line of co-branded lubricants, which covers all of the car models built by Renault in 2018.

ELF has been working alongside Renault for the benefit of motorists for 50 years. Spurred by a determination to stay ahead of market trends and showcase the latest tech advances, the partnership aims to enhance racing performance and everyday driving enjoyment alike. ELF says its commitment to motorsports also enables the partners to draw on recognized expertise to develop even more effective products, used daily by millions of motorists.

The new ELF EVOLUTION RN-TECH line of co-branded lubricants being launched with limited-edition packaging to celebrate the partnership’s 50th anniversary.

Designed for performance and reliability, the new line of high-performance lubricants is marketed under both the Renault and ELF brands and meets the new RN17, RN17 FE and RN RSA carmaker standards.

“The ELF-Renault partnership has surmounted challenges and logged remarkable successes for 50 years now,” said Mathieu Soulas, Total Lubrifiants’ vice president. “And it’s not over yet, because we stand alongside Renault ready to tackle whatever environmental, technical or business challenges the future may bring.”

*As measured by the official M111FE fuel economy improvement test.

Advertisement
In this article:ELF, lubricants, Renault
Print
Up Next: