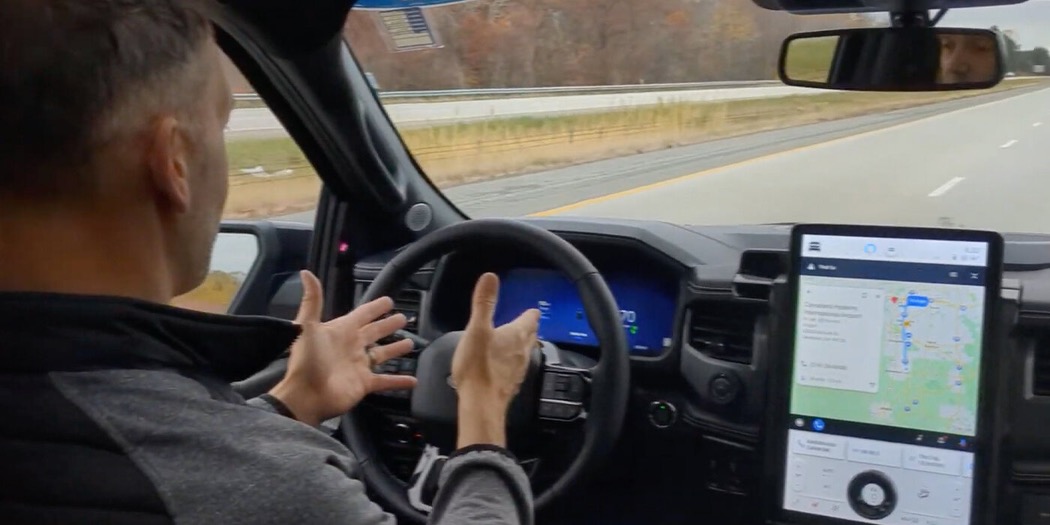 How better to build excitement about this industry’s future than by showcasing the exciting vehicles already here?

Sometimes the hardest thing to do is nothing at all, especially when you’re driving an autonomous vehicle at highway speeds in midday traffic.

I learned that the other day, when a local industry cheerleader stopped by my office with a 2022 Ford F-150 Lightning Platinum edition. “Wanna go for a ride?” he asked innocently enough.

Now, I’ve written about electric vehicles and talked about them with experts in all facets of this industry for years, but I’ve never actually had the opportunity to drive one. I’ve ridden in a few, thanks to Uber, Lyft and the Tesla Tunnel that runs under the streets of Las Vegas, but to be honest, I was a little nervous about getting behind the wheel of this $115,000 truck.

Still, a couple of colleagues and I jumped at the chance to check out the … future?  … the present? Whatever, we climbed inside, buckled up and listened as Mike Wiant, founder of the Ohio Tech Group, explained how the truck operated. Then, we silently glided out of the parking lot.

Well, the truck was silent – we were giggling like children at the features in the spaceship-like cabin. With its massaging seats, huge video screen and 18-speaker sound system, I might as well have been sitting in my local movie theater.

Instead, I found myself doing 65 mph with my hands off the wheel as the truck, operating in “Self-Driving Mode,” capably coped with the curves, the surrounding traffic, and the potholes of the Akron Interstate. It took every ounce of self-control not to grab the wheel and take over from the multiple ADAS features. Yet, with Mike’s encouragement, I let the truck do its thing.

As we drove – er, rode – Mike revealed his ulterior motive with the Ford Lightning, Hummer EV, and Rivian R1T trucks that he was borrowing from local dealerships. It wasn’t necessarily to impress jaded journalists and bored graphic artists, nor to sway everyone’s opinion about the future of electric vehicles. Instead, he was engaging in a little bit of guerrilla warfare in partnership with local automotive instructors.

“Basically, I’m showing up with these trucks at local auto shop classes,” says Mike, “in a blatant attempt to encourage kids about the opportunities that are out there. What better way to help build excitement about the future of this industry than by showcasing the exciting vehicles that are already here?”

Excitement is something Mike brings in bucketsful. I’ve been in a classroom with him that flipped from housing inattentive bodies to having enthusiastic, active discussion participants. He encourages kids to crawl in, on and under the vehicles, all to foster conversations between student and instructor about how the components they’re learning about in the classroom relate to what they’ll be servicing in the future.

Mike says his ultimate goal is to help bring students together with shop owners in an attempt to not just acknowledge the technician shortage but do something about it.

Sounds like Mike Wiant recognizes that autopilot may have its place on the road but not in the classroom.

Advertisement
In this article:EVs, tech training
Print
Up Next:

Electrifying The Next Generation Of Techs

Autel Energy, BEQ Technology Partner for EV Charging in Quebec
Connect with us