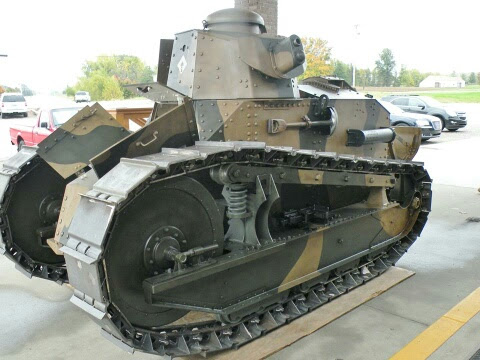 This was no ordinary rebuild. Gen. Patton’s tank (yes, that Gen. Patton) — a WWI-era M1917 — stands more than 7 feet tall and is 16 feet long. It’s equipped with a machine gun and keeps a crew of two soldiers. A rebuild had never been attempted. 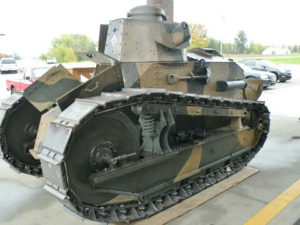 Since 1937, when EATON Detroit Spring was started by Mike Eaton’s grandparents Frank and Grace, the leaf and coil springs manufacturer has become a titan in the industry. With more than 24,000 OE blueprints and 80 years of experience, EATON Detroit Spring has provided its expertise to dozens of custom projects.

“I am amazed by the things I get to learn in this business,” Eaton said. “Randy’s tank project reinforced that one never will know it all.”

Becht has been in the street rod business for many years, and throughout his career has restored military vehicles for museums and movie sets alike. But his newest project was perhaps his most ambitious ever, and he knew he had to call on the best to make it a reality.

“It was my wife Janet who had the idea of rebuilding Gen. George S. Patton’s tank,” Becht said. “She told the (Indiana Military Museum) CEO, Jim Osborne, that we could do it.”

Patton’s tank — a WWI-era M1917 — stands more than 7 feet tall and is 16 feet long. It’s equipped with a machine gun and keeps a crew of two soldiers. A rebuild had never been attempted.

Over 18 months, Becht and his team, Grant Becht and Brian Bartholome, made slow-but-steady progress rebuilding the tank. The 7-ton machine had very few original parts, and no blueprints.

“Most of the parts were built or recreated from pictures, but that’s what we pride ourselves on—building what was lost to history,” said Becht.

When it came time to build custom springs, however, progress came to a halt—until Becht contacted Mike Eaton at EATON Detroit Spring.

“Randy sent a rather vague email asking if we could build four springs to special specs,” said Eaton. “Because he could not give much information, I was afraid we would not be able to help him. But once he said the spring was for Gen. Patton’s tank, I knew we would make it happen.”

Becht explained that the importance of the spring setup was unexpected—without the right rates and specs, the tank not only wouldn’t sit right, it wouldn’t function properly, either.

“What we started with was flawed,” he explained. “EATON Detroit Spring came in and saved the day. They not only corrected 100-year-old flawed engineering, but improved it greatly.”

To create something that would work, Eaton’s first steps were to ask the questions needed to build the custom tank springs, including:

“Randy gave me what he could and mentioned a couple of weak points that he saw in the original design,” Eaton recalled. “Then I went to work.”

Calling on his 40-plus years of spring-building experience, Eaton created a design he believed solved all the problems, including a way to make a quick correction if needed.

“Randy installed the springs and called me happier than a kid in a candy store,” he said. “The tank sat perfectly.”

It was one of those projects where talented individuals come together to create something special.

“Randy is an extremely talented man,” said Eaton – though Becht is quick to share the accolades.

“Without the dedication and charity of industry leaders like Mr. Eaton and others, we would not be able to do the things we do,” said Becht. “We thank God for our ability to do what we love and to bring happiness to museum patrons everywhere we send our creations.”

Those creations are delivered to institutions all over the United States, with additional collaborations beginning with several European museums next year.

As for Patton’s WWI tank, it was dedicated Nov. 2, received by George Patton Waters, Gen. Patton’s grandson and fellow veteran. It is now on permanent display at the Indiana Military Museum in Vincennes, Indiana.

Advertisement
In this article:EATON Detroit Spring, Restoration
Print
Up Next:

EATON Detroit Spring: Restoring A WWI Tank – Without A Blueprint