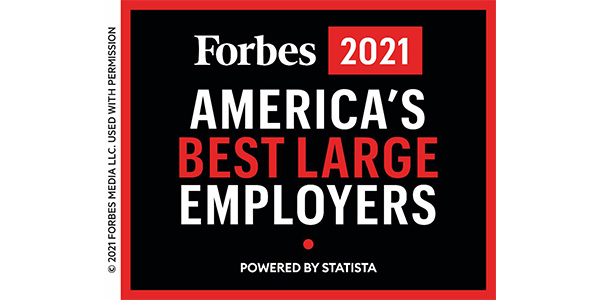 The company ranks as one of America’s Best Large Employers for 2021 by Forbes and Statista.

This award is especially meaningful because it comes from employees after an unpredictable year during a pandemic. “Through all the twists and turns of the last year, the strength and fortitude of our people was truly remarkable. Frankly, we are humbled by their dedication and honored to be recognized for the third time as one of America’s Best Employers by Forbes and Statista,” said Chris Pruitt, CEO and president of East Penn. “Our incredible family of employees worked together every step of the way to guarantee our essential products were available when they were needed the most.”

For the 2021 recognition, East Penn was ranked among some of the largest, most prominent companies in America. The ranking was based off of an anonymous survey given to more than 50,000 employees at companies with at least 1,000 people. Prior to the award, there was no submission process and companies were not made aware of the survey.

Respondents participated voluntarily and were recruited from thousands of sources to maximize reach and representation. American employees were asked to determine on a scale of zero to 10 how likely they were to recommend their employer to someone else. They were also asked more than 35 detailed questions about working conditions and how they felt about other employers in their respective industries.

This award, and the rest of East Penn’s success, is a direct result of our exceptional people. “I believe this award reflects the amazing commitment, adaptability and perseverance our employees, and their families, have displayed especially throughout the extraordinary times we have experienced with this pandemic,” said Bob Harrop, VP of personnel. “Receiving this honor for the third time is truly humbling and confirms what we have always known, which is that the heart of our company will always be our people.”

East Penn was awarded along with 500 other large American companies, which have more than 5,000 employees.

Advertisement
In this article:Deka Batteries, East Penn Manufacturing
Print
Up Next: