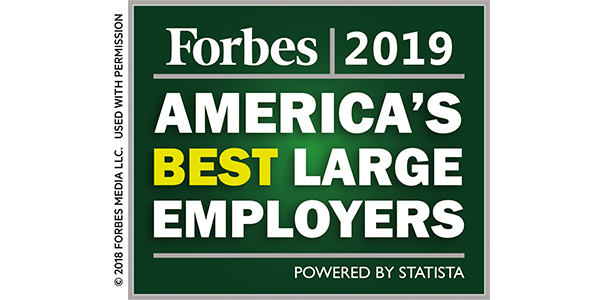 This is the second year in a row East Penn has been named to the list, achieving a higher rank than the previous year.

East Penn Manufacturing Co. has announced that the company ranks as one of America’s Best Large Employers for 2019 by Forbes and Statista. This is the second year in a row East Penn has been named to the list, achieving a higher rank than the previous year.

East Penn was ranked among some of the largest, most prominent companies in America. The ranking was based on an anonymous survey given to almost 50,000 employees at companies with at least 1,000 people. Prior to the award, there was no submission process and companies were not made aware of the survey.

Respondents participated voluntarily and were recruited from thousands of sources to maximize reach and representation. American employees were asked to determine on a scale of zero to 10 how likely they were to recommend their employer to someone else. They also were asked more than 35 detailed questions about working conditions and how they felt about other employers in their respective industries.

East Penn was recognized along with 500 other large American companies that have more than 5,000 employees.

Advertisement
In this article:east penn, Forbes
Print
Up Next:

Spectra Premium Awarded 2018 Supplier Of The Year, Silver Category, By Crow-Burlingame/Bumper To Bumper